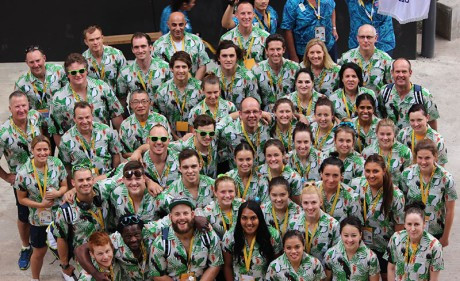 The Pacific Games Council (PGC) has unanimously approved extending the amount of sports Australia and New Zealand compete in at the 2019 edition of the event in Tonga, executive director Andrew Minogue has told insidethegames.

The 22 members of the PGC agreed on the move during its General Assembly in Vanuatu, which began today and concludes tomorrow.

Under the changes, the two nations will now also additionally compete in athletics, beach volleyball and judo, while New Zealand have been granted entry into the football tournament at the Games in Tonga in three years’ time.

In another unprecedented step, the PGC General Assembly approved both nations' participation at the 2017 Pacific Mini Games in Vanuatu, where they will take part in rugby sevens and weightlifting.

Minogue hailed the increased presence of Australia and New Zealand at the events and claims it will help "take the Games to a new level”.

“The PGC is delighted that Australia and New Zealand were unanimously endorsed by the membership to participate by invitation in our two upcoming games,” the PGC executive director told insidethegames.

“Both countries gratefully received the invitation and pledged to continue their support for the Pacific Games, which was very warmly received by the delegates.

“It will continue to take our games to a new level and achieve better recognition as the continental games for Oceania.”

While the participation of Oceania’s two most successful sporting countries at Port Moresby 2015 was largely heralded, New Zealand found themselves at the centre of several controversies.

Their football team were thrown out of the Olympic qualifying tournament, which was being staged alongside the Pacific Games equivalent, for fielding an ineligible player, South-African born Deklan Wynne, in the semi-final against Vanuatu.

The debacle cost them their place at the 2016 Olympic Games in Rio, with the available slot eventually secured by Fiji.

New Zealand’s footballers were also criticised by PGC President Vidhya Lakhan after they claimed the Athletes’ Village was not of an acceptable standard to live in.

Coach Anthony Hudson had previously branded the venue conditions as “crazy” and blasted the scheduling of the tournament.

Weightlifter Douglas Sekone-Fraser opted to withdraw from New Zealand’s team after he posted pictures of local people dressed in traditional Papua New Guinean clothing with the hashtag "#cannibals" on social networking site Instagram ahead of the Opening Ceremony.

The Australian contingent at Port Moresby 2015 was made up of 43 athletes and took home a total of 47 medals, including 19 gold.

New Zealand finished with a haul of 20 medals, with Angela Kilday’s victory in the under 46 kilograms taekwondo event their only gold.

The meeting in Port Vila continues tomorrow, with the PGC due to announce either Tahiti or the Solomon Islands as the hosts of the 2023 Games.