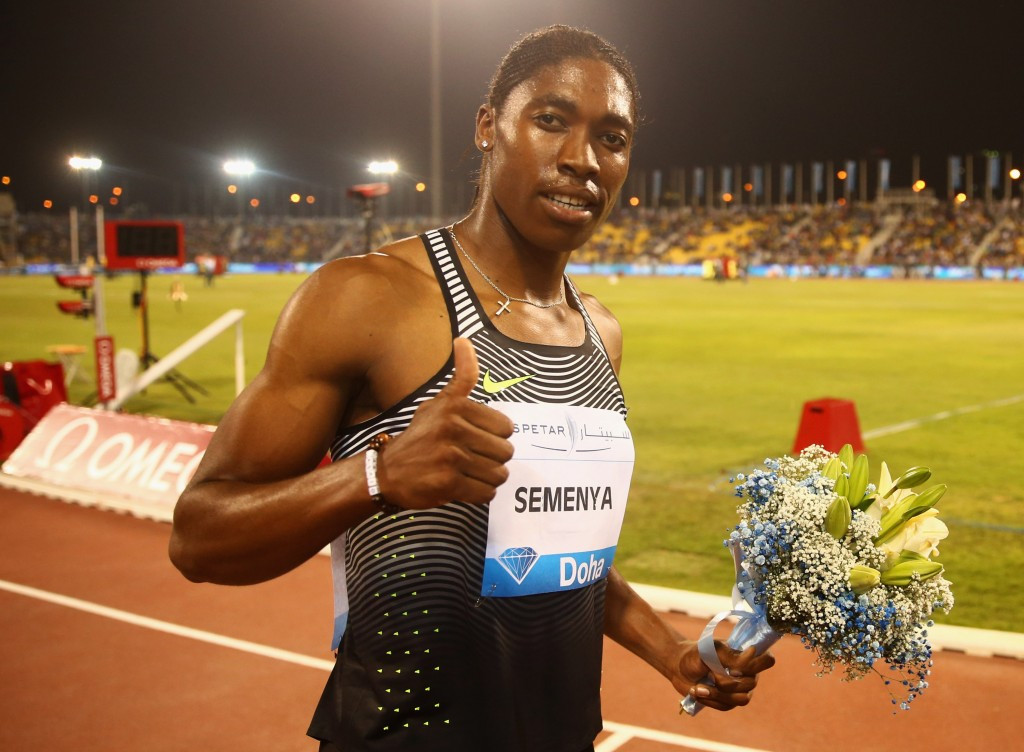 Following her world title win at Berlin in 2009 it was revealed that the then 18-year-old had undergone gender testing and she was withdrawn from international competition until July 2010.

But last year the rules introduced by the IAAF in 2011, partly in response to Semenya’s case – which required female athletes with high levels of male hormones to obtain medical clearance before competing – were suspended for two years by the Court of Arbitration for Sport.

That put the burden of proof back onto the world governing body, which is now working towards appealing a decision which the IAAF President Sebastian Coe described this week as “slightly surprising”.

“I am focused on what I am doing.

"My preparation has gone really well but I can’t say there have been many changes in my training or my attitude.

"I have a great team behind me – my coach, my physio, a team of scientists.

"My next race will be in Rabat [on May 22] and I’ll do three more races until the Olympics.”

Qatar’s athletics golden boy Mutaz Essa Barshim endured a less than lustrous evening in front of his home crowd as he exited the high jump competition after failing at 2.29 metres – 14 centimres less than the 2014 personal best that made him the second best of all time.

Victory went to the London 2012 silver medallist from the United States, Erik Kynard, who cleared the 2016 best of 2.33m ahead of China’s Guowei Zhang, who managed 2.31m.

But the 2014 world indoor champion seemed equable about the night’s outcome afterwards.

“I’m not at all disappointed about my performance,” he said.

“It’s all part of the plan.

This being an Olympic year, I’m taking things slow.

"Last year I peaked early and by July I was practically dead.

"I’m not going to repeat that mistake.

"The idea is to take things slow and steady.

"I thank the fans for cheering me on.

"I promise not to disappoint them in Rio.”

The expected fireworks in the triple jump duly arrived – but in the women’s event, where a national record of 14.92m from Venezuela’s Yulimar Rojas threatened to end the unbeaten run which Colombia’s Caterine Ibarguen has compiled since being beaten to Olympic gold at London 2012.

The leggy 20-year-old who claimed a first World Indoor gold for her country in Portland in March set a 2016 world-leading mark of 14.61m in round two, to which Ibarguen responded with 14.77m.

The younger jumper regained the lead with a third round effort of 14.79m and extended it with her penultimate effort.

But the world champion responded immediately with her fifth round jump of 15.04m to secure her 32nd consecutive victory.

“I’m happy to start the season with a jump over 15m,” said the 32-year-old from Apartado, who added that she had the 15.50m mark with which Ukraine’s Inessa Kravets won the 1995 world title  in her sights.

“I will keep working hard and I will definitely try to break the world record,” said Ibarguen, whose best of 15.31 was achieved two years ago.

“It has stayed untouched for 20 years.”

Meanwhile the young athlete whom Ibarguen described as “fantastic” has her own imminent targets: “I am so satisfied with the new record in my first Diamond League appearance. Fifteen metres is so close now - I am sure I can make it.

The men’s triple jump was a relatively muted affair, although it also featured a significant contest as China’s Bin Dong, with a third round effort of 17.07m, got to within a centimetre of the lead established by America's Christian Taylor before the world and Olympic champion shifted into a higher gear with jumps of 17.19m and, finally, 17.23m.

The Netherlands’ world 200m champion Dafne Schippers, who leads the 2016 rankings with 22.25sec, was unable to achieve the same result over 100m as she was beaten into second place despite clocking 10.83.

Victory - and a place at the head of this season’s rankings - going to world bronze medallist Tori Bowie of the United States.