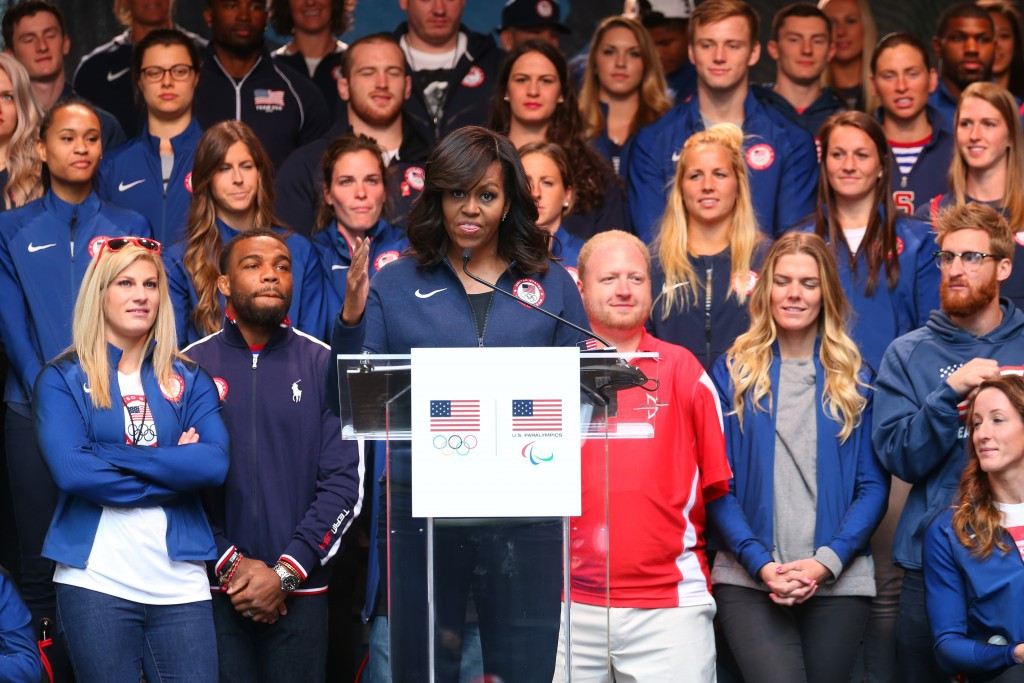 She was present in Times Square in New York City to reveal the organisation's backing of the scheme, with a total of 16 national governing bodies outlining various projects to engage children in their sports.

It is hoped that they will be able to utilise the inspiration of the Rio 2016 Olympic and Paralympic Games to help make children more active and healthier.

This would help the First Lady's aim of solving the epidemic of childhood obesity within a generation.

"We want our young people to be inspired by the amazing stories of our Olympic and Paralympic athletes,” she said.

“And we don’t just want our young people to watch these Olympic sports – we want them to get active and try these sports out for themselves.

“That’s why I am so thrilled to announce that the USOC and 16 of its national governing bodies will be providing opportunities for nearly two million kids across America to participate in Olympic sports right in their own communities.”

Among the organisations who will provide beginner programmes to young athletes are USA Basketball and USA Swimming, with the two national governing bodies aiming to provide activities for 180,000 and 600,000 young people respectively.

The US Tennis Association’s Foundation will look to engage 225,000 youngsters from low-income households in summer and after school activities, while USA Track & Field will expand its youth programme to reach 120,000 children across the country.

The national governing bodies of archery, cycling, equestrian, hockey, gymnastics, handball, judo, synchronised swimming, triathlon, weightlifting and wrestling have also signed up to produce programmes as part of the initiative.

USA Paralympics have estimated they will attract 3,000 new people with physical disabilities and visual impairments to adaptive sport this year, with a total of 50,000 people currently taking part in sport annually through 225 Paralympic sport clubs.

The commitments were secured by the Partnership for a Healthier America, who work with public, private and non-profit leaders to help tackle obesity, with the organisation due to work with USOC to monitor the progress and develop further aims.

“It’s an exciting time for our athletes and for fans across the country, and it’s the perfect time to launch our collaborative efforts with Mrs. Obama and the Let's Move initiative," said USOC chief executive Scott Blackmun.

“The more we can do to expose children to Olympic and Paralympic sports, the healthier and happier they will be.

“We're thrilled to harness the incredible interest in the 2016 Games to promote active, healthy lifestyles, and to encourage the next generation of Team USA all-stars.”