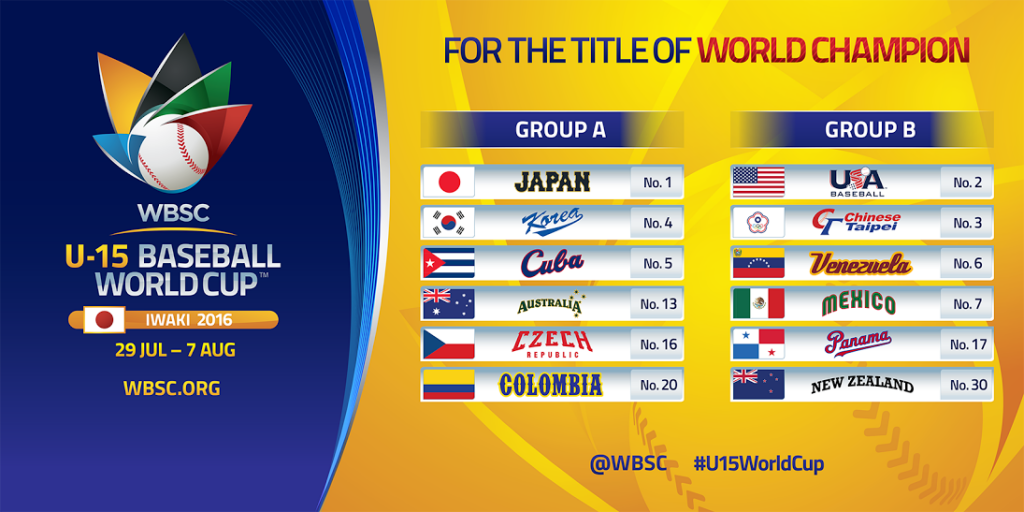 Defending champions Cuba have been drawn against world number one ranked Japan at the World Baseball Softball Confederation (WBSC) Under-15 Baseball World Cup it was announced today.

Both country were placed into Group A of the 12-team tournament, due to begin on July 29 in Iwaki in Japan.

They will be joined by Australia and the Czech Republic, as well as world number four ranked South Korea in the opening round of the competition.

The United States will begin as the favourites in Group B as they seek to go one stage further than the 2014 edition of the competition, having been beaten by Cuba in the gold medal match in Mazatlán in Mexico.

Their biggest threat in the group is expected to come from Venezuela, the bronze medallists in 2014, while they will also meet Mexico, Panama, Chinese Taipei and New Zealand.

Following the completion of the group phase of the competition, the top three countries from each will advance to a super round to decide which teams will compete in the finals and third to fourth place match.

The tournament is scheduled to place until August 7 in a city locate in the Fukushima Prefecture.

Iwaki was among the cities in northeastern Japan seriously damaged by the earthquake and tsunami that struck Japan in March 2011, with Fukushima suffering from nuclear meltdowns.

A full competition schedule will be confirmed in the coming weeks, but with 100 days to go before the tournament, the WBSC have revealed the official look for the competition, including a new poster.

Designed by the British branding experts WORKS, the visually identity has been aimed to reflect a modern youth world championship brand, while reinforcing the overall branding of all WBSC Baseball World Cups and the WBSC’s flagship Premier12 competition, officials claimed.

The WBSC has also revealed that “for the title of world champion”, will now be the first-ever slogan of the Baseball World Cup.

The winner of the Under-15 Baseball World Cup 2016 will be awarded 440 points under the WBSC’s new world ranking system.