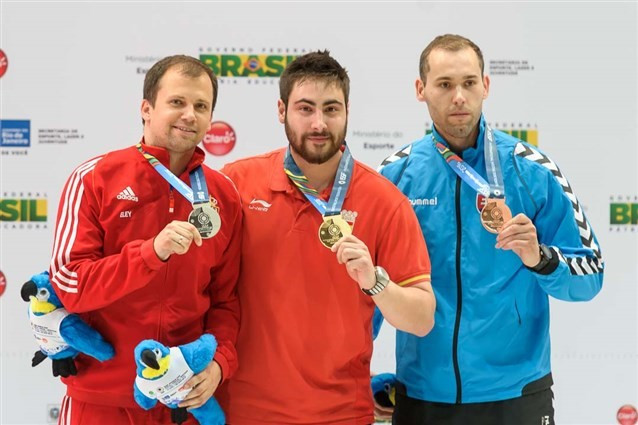 The lead was traded several times between the Spaniard, Serbia’s Damir Mikec and Slovakia’s Juraj Tuzinky, but it was Carrera who was on top at the end after firing a 9.5.

This was enough to jump ahead of Mikec who only managed 9.0, with Carrera finishing on a tally of 199.3 for gold.

Two other finals were held at the Olympic Shooting Centre in Deodoro, with the tournament doubling as a test event for Rio 2016.

China's Du Li won the first gold on offer as she triumphed in the women's 10m air rifle.

The 34-year-old last won gold at a World Cup event nine years ago but staked her Olympic potential by finishing with a points tally of 208.3.

Russia’s Daria Vdovina claimed the silver medal on 208.0 as bronze went to Germany’s Selina Gschwandtner on 186.8.

There was also gold for Chinese Taipei as Lin Yi Chun fired her way to the women's trap honours.

She reached the final the hard way, however, seeing off China's Chen Fang via a shoot-off after both had finished their semi-final with 12 hits.

Seven additional targets were required before Lin sealed her passage through, where she proved to be too strong for Lebanon's Ray Bassil.

Lin was successful with eight of her last nine targets as she won gold by 10 hits to nine.

Chen was unsuccessful in the clash for bronze, going down 11-9 to German Sonja Scheibl.

The action in Rio continues tomorrow with the women's 10m air pistol and men's trap finals.