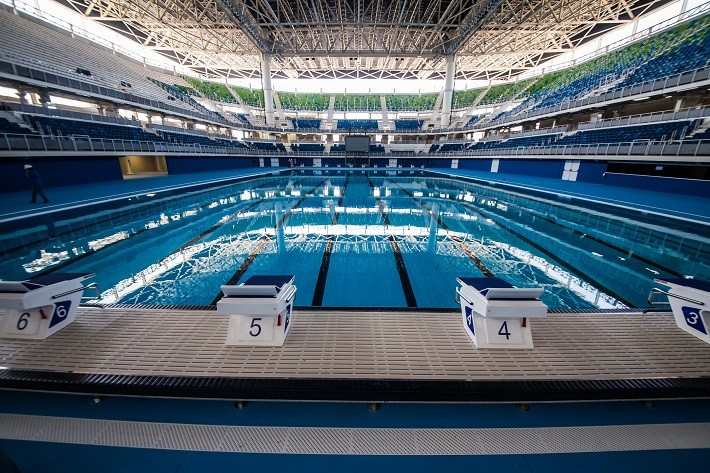 A first examination for the freshly unveiled Olympic Aquatics Stadium is to take place tomorrow when the Rio 2016 swimming test event gets underway.

The venue in the main Olympic Park in Barra de Tijuca was officially opened last week in a ceremony attended by under-fire Brazilian President Dilma Rousseff.

Designed to showcase the sustainability for the Games, the Stadium has been built using "nomadic architecture" techniques that will allow it to be taken down and rebuilt as two smaller aquatics venues after the Games.

It also has an innovative natural ventilation system that will keep it cool while reducing energy usage, with 15,000 "strategically positioned tiny holes" drilled into the structure to ensure a refreshing air-flow.

This will save the equivalent of 10,000 household air conditioning units which would otherwise have been used, it is claimed.

There is space for 14,997 spectators in the venue, which has two pools, one for competition and one for training.

Knock-out stages of water polo competition is also due to take place there during the Olympics, with diving, synchronised swimming and preliminary water polo taking place at the neaby Maria Lenk Aquatic Center.

As well as a test event, the meeting - called the Maria Lenk Trophy after the two-time Olympian who at Los Angeles 1932 became the first Brazilian and South-American woman to participate in the Summer Games -  will host the final Brazilian Olympic trials.

It will be followed by a Paralympic swimming test event from April 22 to 24 and a water polo one from April 25 to 29.