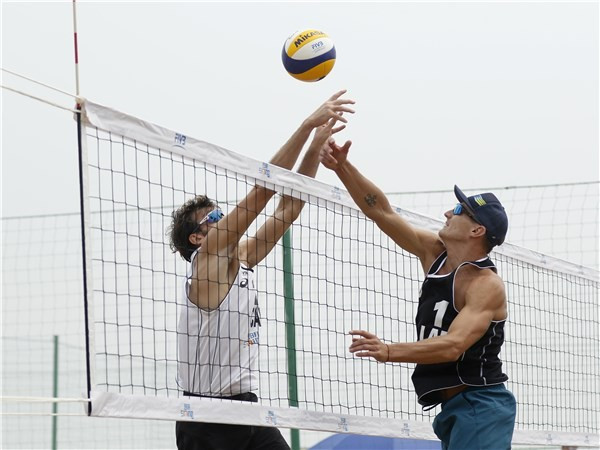 Canada’s Chaim Schalk and Ben Saxton claimed their third straight victory at the International Volleyball Federation (FIVB) World Tour Xiamen Open to seal their place in the second round in China.

The top seeds had recorded two wins on the opening day of competition in the main draw, but faced the challenge of Latvia’s Martins Plavins and Haralds Regza, who also boasted a 100 per cent record in Pool A.

A marathon opening set eventually went the way of the Canadian pair by a score of 32-30, with Schalk and Saxton aiming to avoid competing in a first round contest tomorrow.

They were able to miss the additional match and go straight through to round two, as they claimed the second set 21-16 against their Latvian rivals, who won the inaugural European Games gold medal last year in Baku.

“It’s not easy, the first set went to 30 something,” said Saxton after the victory.

“They were playing pretty well and in the first set the side outs were pretty good on both teams.

“We managed to get to sneak the first side-out and we were both tired in the second set, and we managed to make fewer errors than them.”

Second seeds Aleksandrs Samoilovs and Janis Smedins of Latvia, who finished as bronze medallists at the 2015 edition of the event, finished top of Pool B.

The duo came from behind to beat Turkey’s Murat Giginoglu and Volkan Gögtepe 21-23, 21-19, 15-11 to record their third straight victory and receive a bye to the second round.

In the women’s competition, the first day of the main draw saw America’s April Ross and Kerri Walsh Jennings underline their status as top seeds by recording two victories.

They began with a 21-13, 21-7 win over Russia’s Anastasia Barsuk and Alexandra Moiseeva, before overcoming Slovakia’s Natalia Dubovcova and Dominika Nestarcova 21-17, 22-10.

The results put them at the top of Pool A, with a third win tomorrow guaranteeing them a place in the second round.