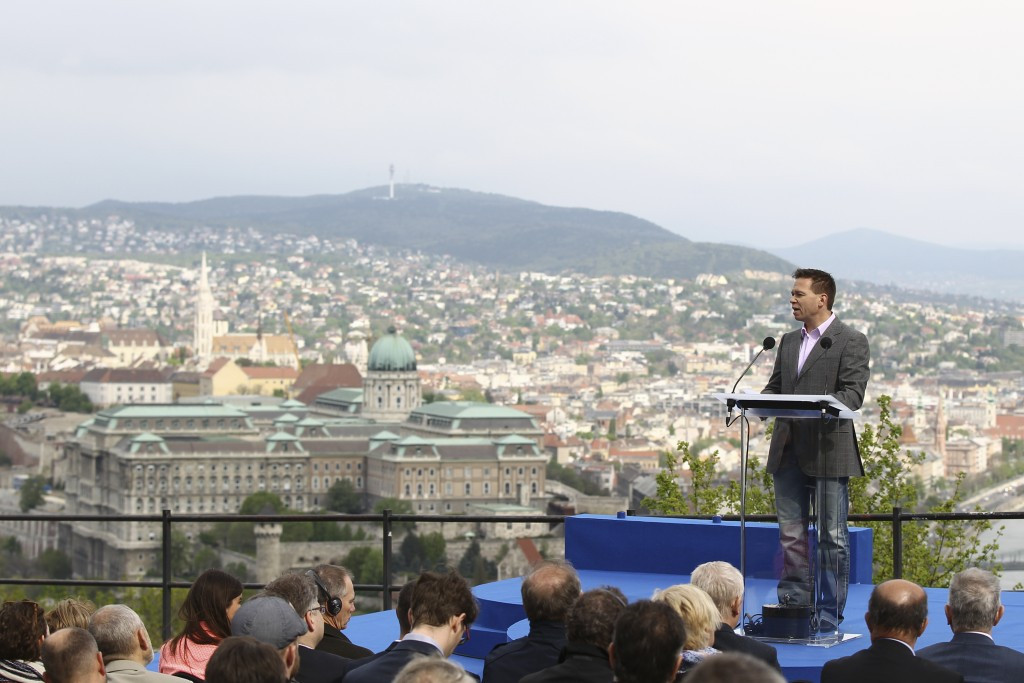 Budapest 2024 chairman Balázs Fürjes has dismissed suggestions the city is the rank outsider in the four-strong race for the Olympic and Paralympic Games, claiming the delay in launching their bid to bring the event to Hungary is “not at all a disadvantage”.

The Hungarian capital is considered the least likely of the four candidates to triumph at next next year's International Olympic Committee (IOC) Session in Lima, where the membership-at-large are due to decide between Budapest, Los Angeles, Paris and Rome for the right to host the Games in eight years’ time.

Doubts about the strength of Budapest's campaign have not been helped by the city being the last to unveil their bid to the world after a special ceremony was held here yesterday.

Rome officially launched their bid back in December.

Los Angeles and Rome followed suit after the submission of the first Candidature Files in February.

The logo for Budapest 2024, which depicts iconic imagery of the Central European country such as the River Danube and the magnificent Liberty Statue, combined with segments to highlight the five colours of the Olympic Rings, was released to a mixed reaction.

A 300-metre banner of the emblem, chosen following an extensive selection process involving input from local graphic artists, was then unfurled on the famous Chain Bridge.

Fürjes firmly believes there are “many advantages” to waiting this long.

“It is not a disadvantage,” he told insidethegames here.

“When there are four competitors in a group and three do everything at the same time then maybe there is more attention to the fourth city doing it at a different time.

“The real campaign starts in February 2017 after the delivery of the last Bid Book and we could have launched the logo any time prior to then.

“Since we had time, we thought why don’t we do it in another way?

“Instead of going to a very well established, fancy communications agency, why don’t we engage the youth of Hungary and why don’t we make an open tender for young Hungarian graphic designers and let them come up with ideas?

“It was a four-month procedure but I think it is worth it and the logo is worth it.

“I think it was a good decision and there is no disadvantage, just the opposite.”

Fürjes also highlighted the timing of the bid as a key deliberate ploy ahead of next week’s SportAccord Convention in Lausanne, where several IOC Members are expected to be present.

“There are many advantages in the way we did it, and just before SportAccord, we can show up to the global sports family with our logo freshly launched,” he said.

“We look to do things our own way and walk our own path and that is what we are going to do throughout the bid.”

French capital Paris, which lost out to London in the 2012 race and last staged the Olympics in 1924, and Los Angeles, the host city of the 1932 and 1984 Games, are considered the front-runners, even with a year-and-half to go until the crucial Session in 2017.

Fürjes feels, however, that Budapest would be a perfect example of the IOC putting their Agenda 2020 reform package, passed unanimously in Monte Carlo in 2014, into concrete action.

"I would never say that Budapest is the outsider," he added.

"I would agree that Budapest is different - there are the three others and then there is Budapest - but I think there’s a reason why the IOC decided to launch Agenda 2020.

“Basically it is about change and I think Budapest fits into that.

"We are following the path that has been opened by the IOC.

“Let’s make Agenda 2020 real - let’s prove that it actually works and let’s put it into action."