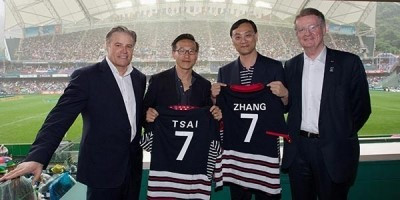 World Rugby have announced a 10-year strategic partnership with Chinese e-commerce giants Alibaba, which is claimed will see the company make a long-term investment in growing the sport in the nation.

The agreement, brokered by CSM Sport and Entertainment, was revealed by outgoing World Rugby chairman Bernard Lapasset at the HSBC Hong Kong Sevens, where Fiji won the seventh event of the series.

He was joined by Alibaba executive vice-president Joe Tsai and Zhang Dazhong, the chief executive of the company’s sport’s division Alisports.

Under the terms of the agreement, Alisports are set to provide support to World Rugby and the China Rugby Football Association (CRFA) to extend the reach of a mass participation, training and education programme.

The company will also invest into World Rugby's "Get Into Rugby" programme, which will target schools and universities in an attempt to encourage more participants to take part in the sport.

In order to further encourage the growth of rugby in China, an overhaul of competition pathways in the country will take place in an effort to men's and women's player pathways and national team development.

“We are delighted to partner with World Rugby and look forward to introducing and developing rugby in China mainland at every level,” said Zhang.

“We encourage young people to join rugby to cultivate the spirit of being strong-willed, aggressive, acquisitive and unified.

“We will use our platform to showcase this excellent sport to millions of people."

Alisports will able to exclusively broadcast World Rugby content via Youku and other media platforms, as well as their own sports platform, which seeks to boost fans engagement with sports teams and brands.

The company are also set to develop an official online store on T-Mall, which will provide merchandise, content and rugby information to fans.

World Rugby will work alongside Alisports to work on implementing a best-practice environment to attract and host major rugby events within the next 10 years.

The deal comes at a time when the sport is experiencing increased popularity across Asia, driven by rugby sevens' Olympic Games inclusion and ahead of Japan's hosting of Rugby World Cup 2019.

"With global participation having doubled to 7.7 million since rugby was readmitted onto the summer Olympic Games programme in 2009, this deal will ensure an unprecedented platform for rugby to reach, engage and inspire new participants across China,” said Lapasset.

“Our collaboration with the CRFA is presently focused on seven provinces but this partnership, built on a common passion for sport's ability to promote community and healthy living, will enable us to achieve more ambitious targets around city, provincial and national men's and women's 15s and sevens competitions and programmes.

"With record investment in schools and university programmes, we will be well equipped to achieve recognition by the Education Bureau under the Sunshine School Sport Program, which will completely transform the depth and breadth of our schools programmes to reach potentially unprecedented participation levels. We look forward to partnering with Alisports to maximise potential within China.”