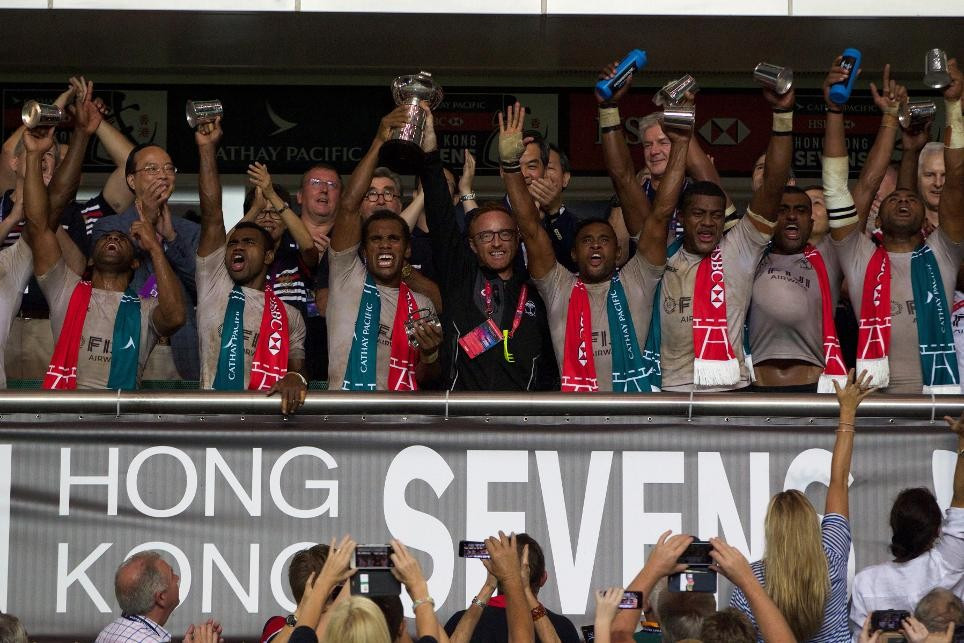 Fiji extended their lead at the summit of the overall leaderboard to five points with a thrilling 21-7 victory over New Zealand in the final of the Hong Kong Sevens tournament.

The defending series champions, who won the corresponding event last season, got off to the worst possible start as Pita Ahki found a way through the Fijian defence to give the All Blacks a 7-0 lead.

Ben Ryan’s Fijians were able to respond quickly, however, as Jerry Tuwai, who was at fault for New Zealand’s opener, restored parity with a try of his own.

As the rain continued to fall, conditions became increasingly tricky but it didn’t have an effect on the quality of the contest and Kitione Taliga turned the final on its head as he touched down following a powerful run to give Fiji the upper hand in the second half.

Amenoni Nasilasila then slipped the ball to Semi Kunatani, who went over under the posts to move Fiji even further ahead and New Zealand never recovered as the Pacific nation held on for a second successive win over their rivals in the Hong Kong Sevens final.

South Africa won a closely-fought encounter with Australia to seal third place as the Blitzboks were one the right side of a 14-12 scoreline to maintain their pursuit of the overall crown.

They currently sit in third place on the standings with 122 points, one adrift of New Zealand, with Fiji the leaders on 128 points.

Fiji’s toughest test of the final day of the competition had come in the quarter-finals as they were pushed all the way by Kenya before eventually emerging victorious with a 12-10 success.

The Pacific side then went on to face Australia and dominated from start to finish, breezing to the final with a dominant 34-5 victory.

New Zealand comfortably overcame Wales in the last eight as they reached the semi-finals by beating Wales 19-7, which set up a crucial clash with South Africa.

The All Blacks had to come from behind as Tim Agaba scored the opening try of the match before Lewis Ormond drew his side level shortly after.

As the encounter veered towards its climax, Regan Ware popped up in the right place at the right time to cross over in the dying minutes and send his side through to the final.

England managed to end the event in Hong Kong on a positive note as they thrashed the United States 19-0 to win the Plate, while Argentina hammered Scotland 26-0 to clinch the bowl.

Russia needed extra-time to secure the shield as they ousted Canada 19-14.

Japan guaranteed their place in the 2016 to 2017 World Rugby Sevens Series as they edged hosts Hong Kong 24-14 in the qualifying clash and they will replace the bottom ranked of the core teams, currently Portugal, in the competition after the final event in London.

The Series continues with the next tournament in Singapore, due to be held from April 16 to 17.