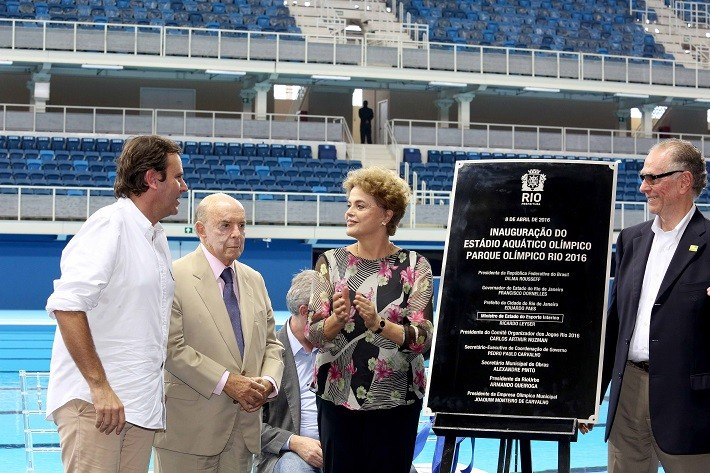 Brazil's under-fire President Dilma Rousseff has predicted this year's Olympics and Paralympics in Rio will be successful despite the political problems currently rocking the host nation, claiming the Games are "a symbol and an example" at a time of unrest.

It comes after Rousseff has reportedly abandoned plans to attend the ceremony marking the lighting of the Rio 2016 Olympic Flame in Ancient Olympia on April 21.

Speaking on a visit to Rio de Janeiro to open the Olympic Aquatics Centre, Rousseff called for the Games to unite the country and bring consensus at a time of political chaos.

"Today, Brazil is facing a climate of bad temper," she said, as reported by Xinhua.

"I feel this climate is not interesting for the country when it needs to return to political and economic stability."

"The Olympics is a symbol and an example for Brazil, which shows what people can do when they unite for the good of the Brazilian people," she added.

"If we are capable of organising the Olympics and the Paralympics, we are also capable of returning our country to growth."

Pressure is growing for Rousseff''s impeachment following the implication of many of her closest allies in the ongoing corruption scandal linked to state-owned oil giant, Petrobras.

A Congressional committee voted this week that there were grounds for the Senate to put the 68-year-old on trial for manipulating budget accounts in 2014 to boost her re-election prospects.

A vote will be made by the lower house of Congress on April 17, where a two-thirds majority would send Rousseff to a full impeachment trial in the Senate.

Millions have marched on the streets in cities including Rio de Janeiro calling for her removal.

Others, however, have marched in her defence and claim she is victim of an attempted coup d'état by right-wing forces.

If she is removed, vice-president Michel Temer, a member of the Brazilian Democratic Movement Party which split from its coalition with Rousseff's Workers' Party last month. would take over, although he is also facing calls for impeachment proceedings to be taken against him.

In this context, it will probably come as a relief to organisers that Rousseff will not be present for the flame-lighting ceremony in order to avoid the Games becoming associated with the increasing political and economic chaos.

Rousseff had been expected to attend the historic April 21 ceremony along with Greek President Prokopis Pavlopoulos and the head of the International Olympic Committee, Thomas Bach.

But the Hellenic Olympic Committee (HOC) have been informed by the Brazilian embassy in Greece that she will not now make the trip.

"The presence of Rousseff was expected, but the Brazilian Embassy informed us that she will not come," said HOC spokesperson Tassos Papachristou.

No specific reasons were given for her decision, he added.

Rousseff's office, however, claim her visit to the symbolic home of the Ancient Olympics was never officially confirmed because it overlapped with another event she is due to attend at the United Nations on drugs and climate change.

She has also cancelled other international visits in recent weeks, including a scheduled trip to Washington D.C. late last month to attend a summit on nuclear security.

It is not unprecedented for the leader of the host nation to miss the flame-lighting ceremony, with neither British Prime Minister David Cameron or Russian President Vladimir Putin present during the respective London 2012 or Sochi 2014 editions.

The Torch is expected to arrive in Brasilia on May 3 following a short relay around Greece and a visit to Lausanne.

It is expected to visit more than 300 Brazilian cities, including all 26 state capitals and the Federal District, before arriving in Rio's Maracanã Stadium for the Opening Ceremony on August 5.