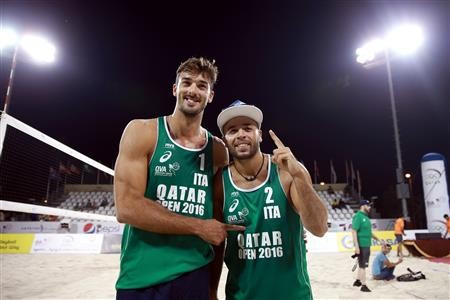 Having overcome Poland’s Bartosz Losiak and Piotr Kantor 27-25, 21-14 in the last four, the Italian duo went on to beat Austria’s Alexander Huber and Robin Seidl 21-17, 21-19 in the final and ensure their first triumph since clinching victory at last October’s Antalya Open in Turkey.

Carambula and Ranghieri took a while to find their rhythm, but took control of the match once they hit their stride.

The former was full of energy at the back of the court and caused a number of problems with his serve, while the latter dominated the net and won the match with a trademark block.

"We were just having fun," Ranghieri said.

"It was hard and we had some hard moments that we had to resolve, but we just did our best in every single game and we’re really happy."

Carambula added: "This is a huge victory for us - I think it puts us right in with a chance of the Olympics.

"We’ll be going to China (for the Fuzhou Open) and then back to Rome to prepare for the Grand Slam in Moscow."

Huber and Seidl reached their first-ever World Tour final after defending champions Markus Bockermann and Lars Fluggen of Germany withdrew late in the second set of their semi-final due to an injury to Fluggen.

It ensured their first World Tour medal since winning bronze at the 2013 Fuzhou Open.

"Our first final and our first silver medal," Seidl said.

"It is nice and good, but after the match you are not satisfied if you lose.

"We enjoyed playing here and we came really came close."

Losiak and Kantor won the third-place play-off without playing a point as Bockermann and Fluggen were unable to compete.

It carries on their impressive start to 2016 which has seen them secure their first World Tour gold medal at last month’s Rio Grand Slam and bronze on Kish Island in Iran in February.

The Qatar Open was the second and last tournament for men only on this year’s portion of the 2015-2016 FIVB Beach Volleyball World Tour.

It was the third straight year that Qatar has hosted a FIVB World Tour in Doha.

The competition continues the road to Rio 2016 that lasts until June 13.

FIVB World Tour events count towards the Olympic ranking, which will determine 15 of 24 spots for each gender that will take part in this summer’s Olympic Games.

The next FIVB World Tour is the Xiamen Open in China, where action is scheduled to run from April 12 to 17.