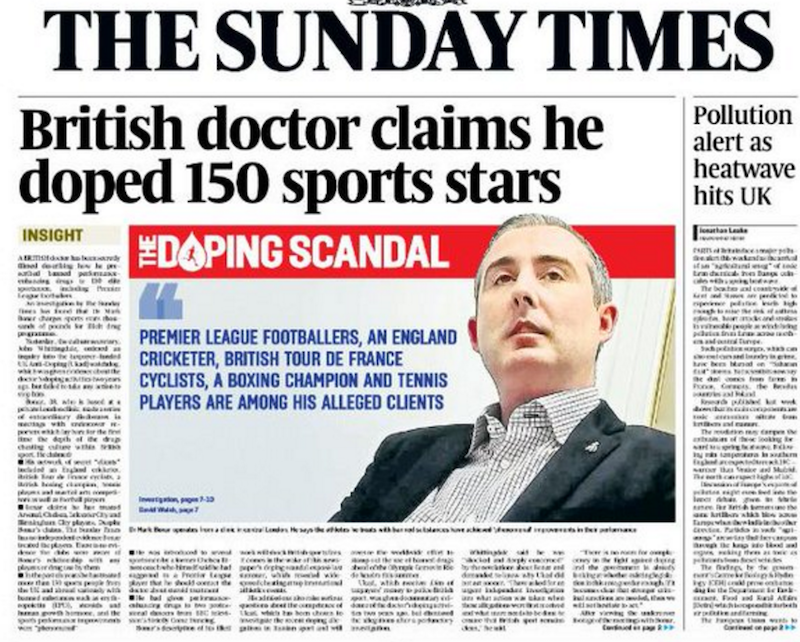 UK Anti-Doping (UKAD) were today facing calls from the Government to explain why they did not take action against a doctor who claims to have prescribed banned performance-enhancing drugs to 150 sportsman, including Premier League footballers.

In the past six years he had treated more than 150 sportsmen from the UK and abroad with banned substances such as erythropoietin, anabolic steroids and human growth hormone, and the performance improvements were "phenomenal", the report added.

Bonar even claimed to have provided drugs to two contestants on the celebrity television show Strictly Come Dancing.

The newspaper admitted, however, it was unable to substantiate the claims made by the doctor.

UKAD chief executive Nicole Sapstead confirmed they had been aware of allegations against Bonar after a sportsperson approached them two years ago but had not been able to act upon them because the doctor was not affiliated to any particular sport.

"Under current legislation, UKAD has the power only to investigate athletes and entourage (including medics) who are themselves governed by a sport," she said.

UKAD had considered informing the General Medical Council (GMC), which overseas medical practitioners in Britain, but decided the evidence they had was insufficient for such a referral, Sapstead added.

In October 2014 the sportsman who had failed a drugs test and was seeking to arrange a plea-bargain supplied UKAD with "handwritten prescriptions" that he said had been issued by Bonar.

The notes were given to an independent medical expert for analysis.

"After assessing all the evidence, as per the National Intelligence Model, UKAD did not believe that there were grounds, at that point, to refer the case to the GMC," Sapstead said.

UKAD chairman David Kenworthy said an independent review would be conducted into the issues raised by the report.

"They will be asked to look at the way the information supplied by the sportsperson was handled and whether proper procedures were followed," he said.

"They will also be asked to make any recommendations to improve the way in which intelligence is dealt with in the future so that UKAD can be as effective as possible in keeping sport clean."

The Culture, Media and Sport Secretary John Whittingale claimed he was "shocked and deeply concerned" by the reports and demanded to know why UKAD had not acted upon the information when they had first received it.

"Sports fans are entitled to be sure that what they are watching is true and fair with all athletes competing on a level playing field," he said.

"I have asked for there to be an urgent independent investigation into what action was taken when these allegations were first received and what more needs to be done to ensure that British sport remains clean.

"There is no room for complacency in the fight against doping and the Government is already looking at whether existing legislation in this area goes far enough.

"If it becomes clear that stronger criminal sanctions are needed then we will not hesitate to act."