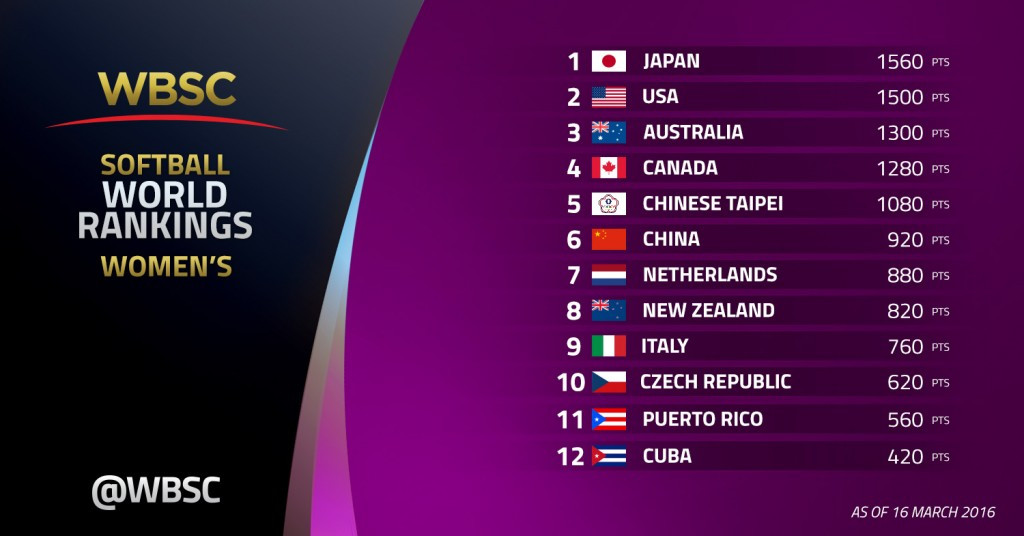 The World Baseball Softball Confederation (WBSC) has launched their world ranking system for softball, with New Zealand and Japan topping the men's and women's standings respectively.

Under the system their performances will be tracked over a three-year period at Softball World Championships, including junior and tier levels.

The initial system was devised by the WSBC Softball Competitions Commission, with the world governing body claiming they will continue to work to study the best method to expand the world rankings to take into account other key events.

Multi-sport events, regional championships, head-to-head events could be among the international competitions which are incorporated into the ranking system in the future.

"These rankings not only provide a benchmarking tool for nations to construct and evaluate their strategic and development plans, but they also give the players and fans a new and exciting way to express the pride of their country through sport," WBSC Softball Division President Dale McMann.

Japan are the first women’s team to hold the world number one ranking, following their victories at the 2012 and 2014 Women’s Softball World Championships.

The WSBC claim that their success is due to baseball and softball being the country’s top sport for youth participation, popularity and existing infrastructure.

Japan also occupy top spot in the men’s baseball rankings, at a time when the WBSC are vying to have the discipline and women’s softball added to the Tokyo 2020 Olympics' sport programme.

The United States are currently second in the women’s softball rankings on a total of 1,500 points, just 60 behind the Japanese national team.

It follows their team claiming silver medals at the 2012 and 2014 World Championships, as well as being the reigning junior world champion.

Australia are third on 1,300 points, while Canada and Chinese Taipei have scored 1,280 and 1,080 points respectively to complete the top five.

New Zealand currently top the men’s rankings with a total of 1,340, having won the 2013 Men’s Softball World Championship.

They also finished second in the 2015 edition of the event, while their junior team finished as the runners-up in their World Championships in 2014.

The current senior world champions Canada are ranked second overall on 1,220 points, with Australia third on 1,140.

If the WBSC proposal for Tokyo 2020 is accepted by the International Olympic Committee at its Session in Rio de Janeiro in July, baseball will be represented by the men and softball by the women.