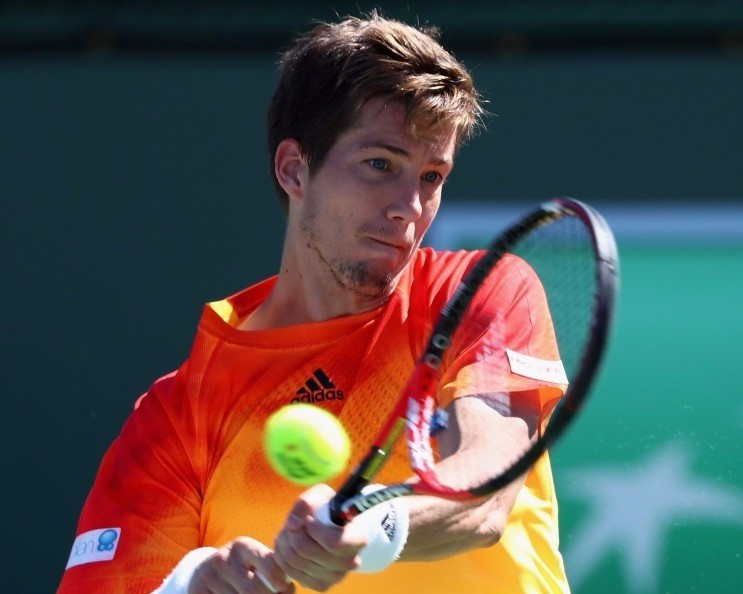 Aljaz Bedene has been declared ineligible to represent Great Britain in the Davis Cup after the International Tennis Federation (ITF) rejected an appeal today.

The 26-year-old, the current world number 57, previously represented Slovenia but was granted British citizenship in March of last year having lived in the country since 2008.

His switch in allegiances immediately made him the British number two behind two-time Grand Slam champion and Olympic gold medallist Andy Murray.

His hopes to play in the Davis Cup - which Britain currently hold - have now been dashed, however.

He previously played for Slovenia three times, the last being in 2012, and a rule change at the start of last year's competition prevents players from representing a second country in the annual team event.

The Lawn Tennis Association (LTA) appealed on behalf of Bedene, who said his application for a passport had been submitted prior to the rule alternation.

His case was initially due to be heard in November but the ITF adjourned proceedings until today.

That was to ensure that "the rights of all parties are considered" but it meant Bedene was ruled out of the Davis Cup Final later that month when Britain beat Belgium.

"The Board determined that the applicable version of the ITF Davis Cup Regulations for the appeal at hand were the 2015 version," said an ITF statement.

"The Board considered all written and oral submissions made by the LTA, Aljaz Bedene, Tenis Slovenia and the original decision maker, the Davis Cup Committee, along with all evidence received before and during the hearing, all on a 'de novo' basis.

"In all the circumstances, the Board determined that an exception should not be made pursuant to Article 35(d) of the ITF Davis Cup Regulations.

"Mr Bedene is not eligible to represent Great Britain in Davis Cup by BNP Paribas."

The ITF's Board of Directors also considered two further cases at its meeting in Moldova's capital Chisinau.

In a similar case to Bedene, Maxim Dubarenco has been banned from playing Davis Cup tennis for Belarus.

The Moldovan-born 22-year-old played 17 matches in the competition for the country of his birth.

There was better news for Russian born Daria Gavrilova, however, who will be able to play for Australia in the Fed Cup, the women's equivalent of the Davis Cup.

The 22-year-old Moscow born player has lived in Australia since she was 15 and has not played Fed Cup tennis for Russia but fell victim to eligibility rules.

She would previously have needed two years' residency in order to play but that was changed to two years' citizenship at the start of the year.

The ITF have decided to make an exception in the case of Gavrilova, winner of the gold medal in the women's singles at the 2014 Summer Youth Olympic Games in Nanjing, while competing for Russia.

Tennis Australia orchestrated the appeal of a player who won the Hopman Cup title with Nick Kyrgios in January.

"The Board determined that the applicable version of the ITF Fed Cup Regulations for the appeal at hand were the 2015 version," a statement said.

"The Board considered all written and oral submissions made by Tennis Australia, Daria Gavrilova, the Russian Tennis Federation and the original decision maker, the Fed Cup Committee.

"In all the circumstances, the Board determined that an exception should be made pursuant to Article 31(b) of the ITF Fed Cup Regulations.