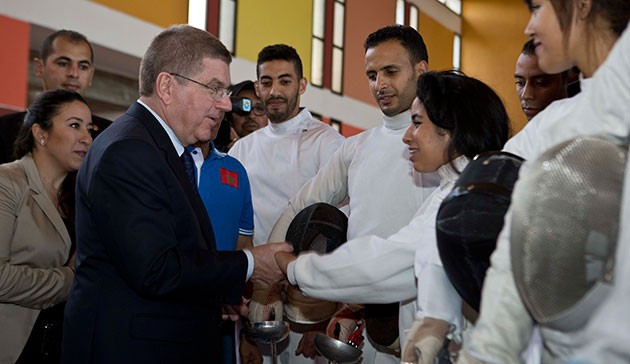 International Olympic Committee (IOC) President Thomas Bach has been informed about a new Moroccan law designed to combat doping during a meeting with the nation's Head of Government, Abdelilah Benkirane.

It came at the end of a four-day North African tour during which Bach also visited Tunisia and Algeria.

Morocco was one of five countries to be warned by the International Association of Athletics Federations (IAAF) about its doping problems at last week's Council meeting in Monte Carlo, along with Ethiopia, Kenya, Ukraine and Belarus.

The distance running powerhouse has been riddled with doping failures in recent years.

Thirty-seven of its athletes have been suspended by the IAAF since 2003, the majority of them in the last four years, with almost no Moroccans competing at the top level today.

Protecting the "clean athletes" was on the agenda during a series of meetings between Bach and officials from the Government and Moroccan National Olympic Committee (CNOM), as well as the programmes developed by the CNOM to promote the Olympic values among the country’s young people.

This included a "cordial and fruitful" exchange with Benkirane, the leader of the Justice and Development Party who has led the Government since 2011.

Bach was informed about the implementation of a law aiming to strengthen the fight against doping on a national level during the meeting, an IOC statement revealed.

“I welcome this initiative by the Government,” said Bach.

“It is a very important step in protecting clean Moroccan athletes, and is a strong signal on an international level, with only a few months to go before the Olympic Games Rio 2016.

"It takes only one medal won by a doped athlete to tarnish the reputation of all the other medals won cleanly by the other members of a team."

It is not yet clear exactly what the new law entails.

A meeting will be held soon in Lausanne between the IOC, the CNOM and the Moroccan Government to "establish a road map for the development of sport in Morocco in compliance with the rules of good governance and the Olympic Charter".

It is expected that these discussions will be held in mutual respect of the autonomy of sport and of state sovereignty, it was claimed.

During his visit, Bach was accompanied by Morocco's IOC vice-president Nawal El Moutawakel, a member of the IAAF Council who claimed 400 metres hurdles gold at Los Angeles 1984, and Association of National Olympic Committees of Africa President, Lassana Palenfo.

The delegation met with athletes training at the Prince Moulay Rachid National Sports Centre in preparation for the Rio 2016 Olympic Games, where Morocco hopes to send a team of 50 athletes.

Nineteen of Morocco's 22 all-time Olympic medals have come in athletics, including all six golds, while three minor medals have been won in boxing.

This followed similar meetings with high-level political and sporting officials in Tunisia and Algeria, which included an emotional visit to the spot in Tunis where a terrorist attack against the Presidential Guard took place last November.

Bach was pictured watching and practicing his own sport of fencing in all three countries.