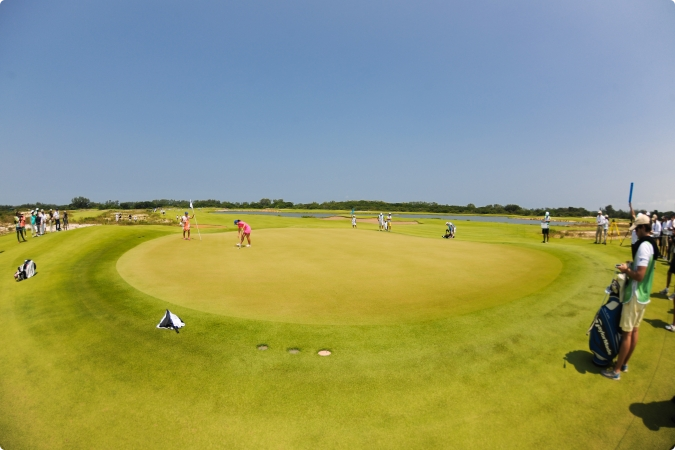 Just nine domestic players participated in the one day exhibition event, a far cry from the much greater demands to be placed on the course during the Games.

Alexandre Rocha, the highest ranked player in the men's draw at 588 in the world rankings, finished tied for the lead with Rodrigo Lee tied on a three-under par 68,

Miriam Nagl led the four-strong women's competition with a four-under 67, although there no prize money and all nine participants were awarded a medal by Dawson.

It was the first competitive round played on the Gil Hanse-designed course will will host the first Olympic golf competition in 112 years.

The course, thought to have cost around $10.6 million (£7.1  million/€9.9 million), has attracted criticism from campaigners in the city, who claimed it will damage the environment.

An International Olympic Committee Executive Board meeting in Rio de Janeiro last February was interrupted by protesters, who branded President Thomas Bach a “nature killer” for the construction of the course.

Concerns have also been raised about the slow building of the course amid fears that the grass would not be ready in time.

A four-day test event was initially scheduled for November before being downscaled and pushed back four months.

Players and organisers hailed the event as a major success, however, not only for the Olympics but also for the development of golf in Brazil.

“This is the future for us,” Rocha said.

“Our existing courses are old and this is modern golf.

"We have plenty of land in this country to be able to make more courses like this.”

Dawson compared the course's wide fairways with the iconic St Andrews Old Course in Scotland, predicting tough conditions when the greens firm up and the wind increases.

“It’s been a long haul to get here,” he admitted.

“But at long last we’ve got a terrific golf course that’s going to ensure golf will have a successful turn in the Olympic Games.”

He added that “very little needs to be done” to get the course itself ready for the Games.