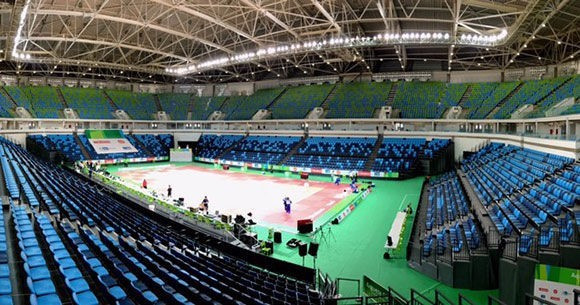 More than 105 athletes across four weight classes are set to compete at the Rio 2016 judo test event, which is due to begin tomorrow in Barra Olympic Park's Carioca Arena 1.

The two-day event brings together 20 delegations; one each from France, Great Britain, Germany, Japan and Lebanon and 15 from the Olympic host nation Brazil.

"This is an important first step in organising the Olympic Games," said Barta.

"It is crucial for us to see how everything works, and what to improve or adapt to guarantee that this summer's tournament will be a great success.

"I want also to emphasise the presence of the representatives of the IBSA (International Blind Sports Federation) who will be in operation during the Paralympic Games.

"We are all working hand in hand."

"I am very excited," said Kenji Saito, the Rio 2016 sports manager for judo.

"We have been waiting for that moment for so long.

"I am also very happy.

"Everything is perfectly in place so far and the partnership with the IJF is a key to this success.

"We will do everything to make this test event and the Games, the best ever."

Araújo was one of the first athletes to perform at the arena as Paralympic judokas took to the mats alongside taekwondo athletes.

The IJF's new Care system, providing officials with the opportunity to rewind and zoom in closely on action through television screens, will be used at the test event.