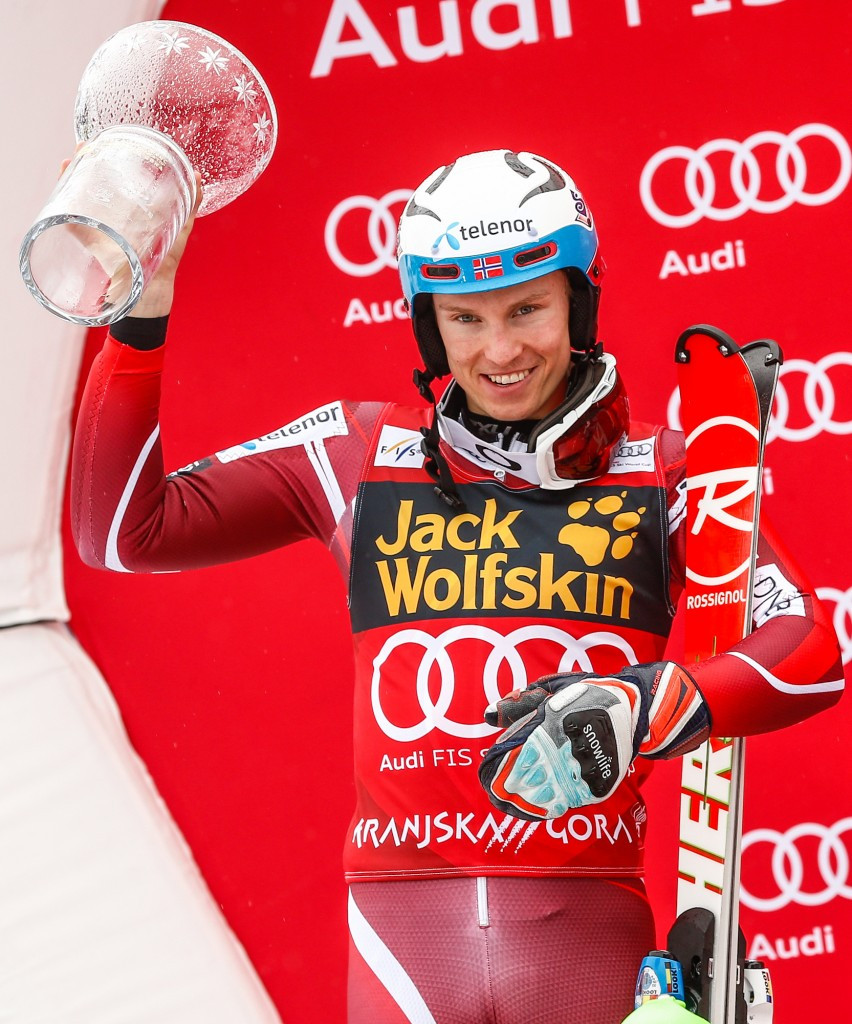 Austrian Hirscher, who will only be denied a fifth consecutive overall crown by a miracle, added to his giant slalom win yesterday with his 39th victory in total.

Twenty-one-year old Norwegian Kristoffersen finished second to ensure that he can no longer be caught by Hirscher in the slalom standings, with just one race in the discipline left this season.

He was fourth quickest after run one but made up the time on his rivals to finish in 1:47.05.

Italy's Stefano Gross clocked 1:47.35 for bronze on a hard surface at the Slovenian venue, which provided good conditions for the skiers.

Kristoffersen, who has won six slalom World Cup races this season, has won a crystal globe for the first time in his career.

"This is maybe the first time in a really long time I had to work really hard with myself and I felt the pressure a little bit,“ said Kristoffersen, who knew Hirscher was breathing down his neck.

"I didn't feel the pressure from the outside, but from myself.

The Norwegian has 811 slalom points compared to Hirscher's 700, with just 100 available in the season-ending event in St Moritz.

In the overall standings, Hirscher leads with 1625 points with Kristoffersen second on 1272.

With six races left this season, the Norwegian can only climb to the top of the standings if he opts to enter the speed disciplines, which he has never done before and is not adept at.

Today's race was also the last slalom for Austria's Reinfried Herbst, who gained nine victories in 126 World Cup starts during a glittering career which also included a silver medal at the Turin 2006 Olympics.

In the women's World Cup, American Mikaela Shiffrin won her fourth slalom race of the season in Jasná in Slovakia.

The 20-year-old Olympic champion won the first two races in the discipline this season but then faced a two-month lay-off after a knee injury.

She returned from that time-off in spectacular fashion with slalom victory in Crans-Montana earlier this month and won today in a combined time of 1:55.60.

Second place went to Wendy Holdener of Switzerland in 1:57.96 while Veronika Velez-Zuzulová claimed bronze on home snow by clocking 1:58.37.

Sweden's Frida Hansdotter came 10th but the 26 points she collected were enough for her to win the overall slalom title on 651 points ahead of the Slovakian's 546.

There was no change in the overall World Cup standings as Swiss skier Lara Gut, who doesn't usually compete at slalom, failed to complete her first run.

Gut is looking to overhaul American Lindsey Vonn, who has 1235 points on top of the leaderboard but won't compete again this season due to a fractured leg.

The Swiss is only 28 points behind with seven races left and is widely expected to make up the gap.

The women's season continues in Jasná tomorrow with the rearranged giant slalom after strong winds postponed the race yesterday.

The men's World Cup heads to Norway, with downhill and super-G in Kvitfjell on March 12 and 13.