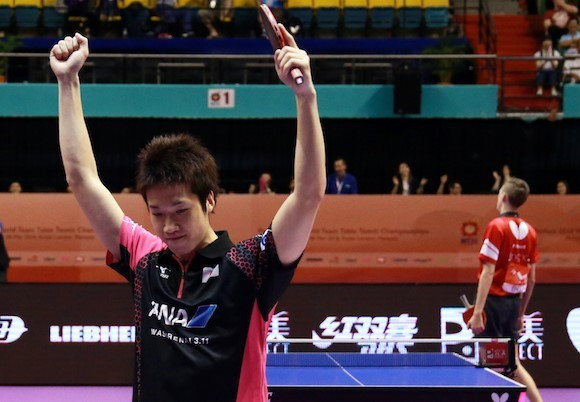 Japan ensured they will be represented in both finals of the International Table Tennis Federation (ITTF) World Team Championships for the first time in 45 years after their men’s team overcame England in Malaysia’s capital Kuala Lumpur.

The last time the table tennis powerhouse achieved the feat was on home soil in Nagoya in 1971, when the women’s team beat China and the men’s team suffered defeat against the same opponents.

Jun Mizutani had to come to Japan’s rescue today against the surprise semi-finalists, beating Liam Pitchford after saving four match points to wrap up a 3-1 win overall.

Awaiting third seeds Japan in the final are defending champions China, who advanced after pulling off a convincing victory over South Korea.

But all eyes were on the third match between Grand Slam champion Zhang Jike and the 2013 junior world champion Jang Woojin.

In their previous encounter at the 2015 Asian Championships, South Korea’s Jang defeated the reigning Olympic champion twice - once in the team event, and once in the singles event.

Zhang didn’t have a good start today, losing nine points in a row to cost him the first game, but his experience eventually told as he won the next three games to seal victory for his team, and move China on to their 12th consecutive men's team final.

China provided the opposition for Japan the last time they contested the final in 1977.

It came eight years after their seventh and most recent triumph at the event.

"We have not been world champions for 47 years," said Mizutani.

"Tomorrow is our time to write history,

Japan’s women had already secured their place in the final after beating South Korea 3-1 yesterday.

Standing between them and the gold medal is China after they won all three of their individual matches against Chinese Taipei 3-0 today.

China and Japan have met five times in the women's final, with the former winning three out the five encounters.