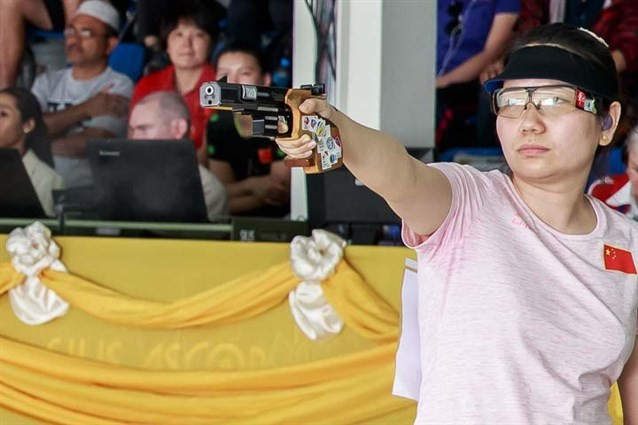 Chinese world champion Zhang Jingjing cemented her status as the favourite for the Olympic gold medal at Rio 2016 as she won the women’s 25 metre pistol event at the International Shooting Sport Federation (ISSF) World Cup in Bangkok.

The 27-year-old, ranked number one in the world, came up against South Korea's Park Hyun Joo, competing in her first-ever World Cup final, for gold and exerted her dominance from the outset before wrapping up a comfortable 8-4 victory.

Zhang had also impressed in the qualification stages with a score of 586 points before she topped the semi-final standings with an impressive 19 hits.

“I work hard, and I always want to win more.

Incheon 2014 Asian Games champion Jitu Rai of India topped the podium in the other final to take place on the second day of competition in Bangkok as he clinched gold in the men’s 50m pistol event.

The current world number five found his range early on and managed to hold off the challenge of China's 2008 air pistol Olympic gold medallist Pang Wei.

Rai sealed victory in style by scoring the maximum 10 points with his last shot to end on a total of 191.3 points.

Pang was forced to settle for silver on 186.5 points, with compatriot Wang Zhiwei, third at London 2012, taking home the bronze medal on 165.8 points.

“The goal for the 2016 season is very clear: I want to win the Olympic Gold medal in Rio de Janeiro,” Rai said.

“Given the amount of training and efforts I put in preparation of this competition, I was really confident before today’s match.”

The first ISSF World Cup event of the season is due to continue tomorrow with finals in the men’s 10m air pistol and 50m rifle prone competitions.