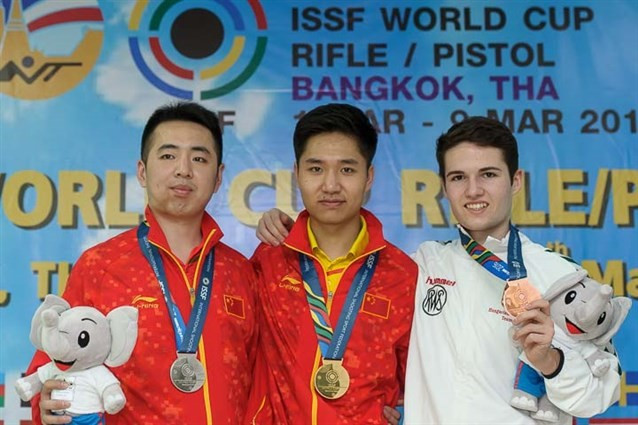 Yang Haoran and Yi Siling won the men's and women's events respectively in the Thai capital, the first World Cup event of the season.

He had a 2.2 point advantage over team-mate Cao Yifei, with Hungary's Istvan Pen third on 186.9.

“My goal for the 2016 World Cup season is to improve my skills and to become stronger and stronger," said Yang, winner of a gold medal in the Summer Youth Olympic Games at Nanjing in 2014.

"Today I have been a bit lucky, but at the same time it’s the hard work that pays off.

"I have been training a lot.”

China's Olympic champion Zhu Qinan had to settle for fifth place today with a score of 143.3 and the silver medallist from London 2012, Niccolo Campriani, was eighth on a tally of 79.9.

In the women's competition Yi, the Olympic champion and current world record holder, finished atop of the podium on 207.7 points.

The world number two's victory was her seventh at World Cup level.

"I really have no secrets: I am training hard, and I am really self confident, both in the sport and in my private life.

"That’s why I think I can make it: I will work through the season to improve my chances of victory.”

Austria's Olivia Hofmann did enough for the silver medal with 205.4 points as Singapore's Ser Xiang Wei Jasmine shot her way to bronze with a tally of 184.6.

The World Cup is due to continue tomorrow with the men's 50m and women's 25m pistol finals.