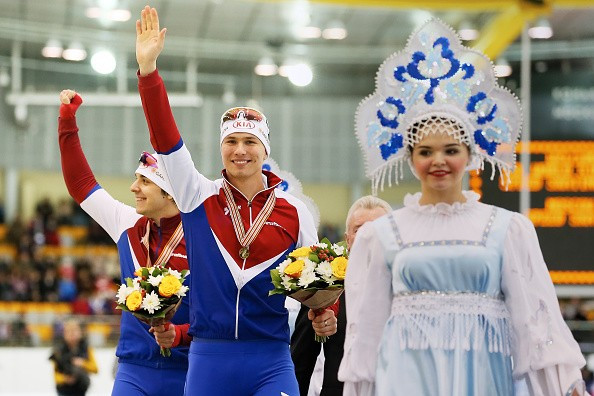 South Korean officials have apologised to Russia's Pavel Kulizhnikov, winner of the International Skating Union (ISU) World Sprint Championships in Seoul yesterday, after mistakenly playing the United States national anthem when he was presented with his gold medal.

The anthem played for few seconds before it changed to the correct one.

Russia's Sports Minister Vitaly Mutko is planning to officially complain to the ISU over the incident.

Kulizhnikov, winner of the gold medal in the event for the second consecutive year, was less concerned by the error and revealed he had already accepted the apology.

"Yes, the US anthem was played for several seconds only," he told Russian news agency TASS.

"All I did was only to look around in surprise.

"However, a big fuss was made out of this situation in Russia.

"I do not understand why it was necessary.

"I do completely accept apologies on behalf of the organisers and I personally believe they should not have worried extending excuses over such omission."

Alexei Kravtsov, President of the Russian Skating Union (RSU), told TASS he hoped that the South Koreans would not repeat the mistake in the build-up to the 2018 Winter Olympics in Pyeongchang.

"The RSU is not planning of launching any proceedings in this regard," he said.

"We hope that the Organising Committees in Seoul and Pyeongchang, which are hosting next year the pre-Olympic speed skating tournaments, learnt their lesson from this incident."

They played the anthem from the 1990s composed by Mikhail Glinka but replaced 15 years earlier by the old Soviet Union anthem but with new lyrics.

The next day Russian fans reportedly sang their anthem a cappella at the World Rhythmic Gymnastics Championships in Stuttgart after a malfunction during Margarita Mamun‘s ceremony for winning the hoop.