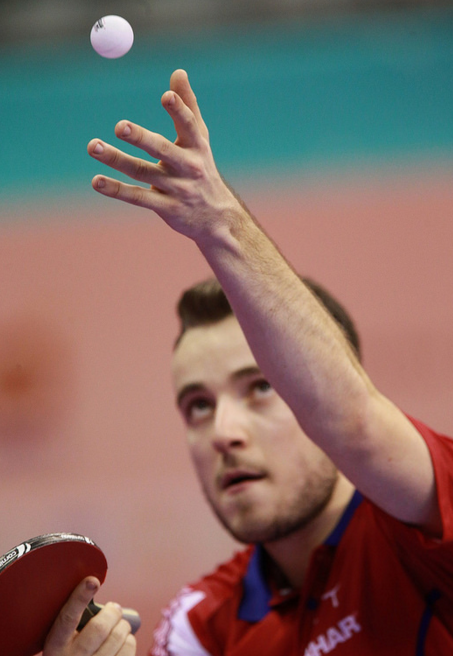 The European champions are without star man Dimitrij Ovtcharov due to a back injury and were defeated in a marathon match that lasted three hours.

World number nine Timo Boll lost both of his matches, 3-0 to Emmanuel Lebesson and 3-2 to Simon Gauzy.

"I have to say that I think that was the very best match of my career; I just beat a legend," said Gauzy.

"Today, Timo was not in the best of shape, he lost to Emmanuel in the second match, he was below his best."

Despite that defeat, Germany did manage a 3-0 win over hosts Malaysia, while France also saw off England 3-0.

Like the French, Sweden boast three wins out of three in the group thanks to successes over Denmark and Malaysia.

In Group A, defending champions and favourites China maintained their perfect start with 3-0 wins over North Korea and Chinese Taipei.

North Korea have moved onto two wins and a defeat after a shock 3-0 success over European champions Austria.

Japan and Portugal have perfect records in Group C, with the Japanese defeating Singapore 3-1 and Poland 3-0.

Portugal were too strong for Belarus, 3-0, and they then beat the Singapore side 3-0.

In Group D, South Korea have yet to be beaten as they made it three wins from three by seeing off Italy and Russia, both 3-0.

Hong Kong are also undefeated after 3-0 wins over the Italians and Croatia.

In the women's competition each country played one game today, with last year's champions China winning for a third time in three games, 3-0 against Romania.

Chinese Taipei boast the same record in Group A after a 3-0 win over Malaysia.

In Group B, Japan saw off North Korea 3-0 and Germany beat Brazil 3-2, with both winning sides undefeated.

The Netherlands are going well in Group C as their 3-1 win over Poland maintained their unbeaten start, with Singapore on the same record thanks to a 3-1 win over Belarus.

In Group D, Hong Kong are still perfect thanks to a 3-0 win against Austria while South Korea are also yet to taste defeat after beating Sweden 3-0.