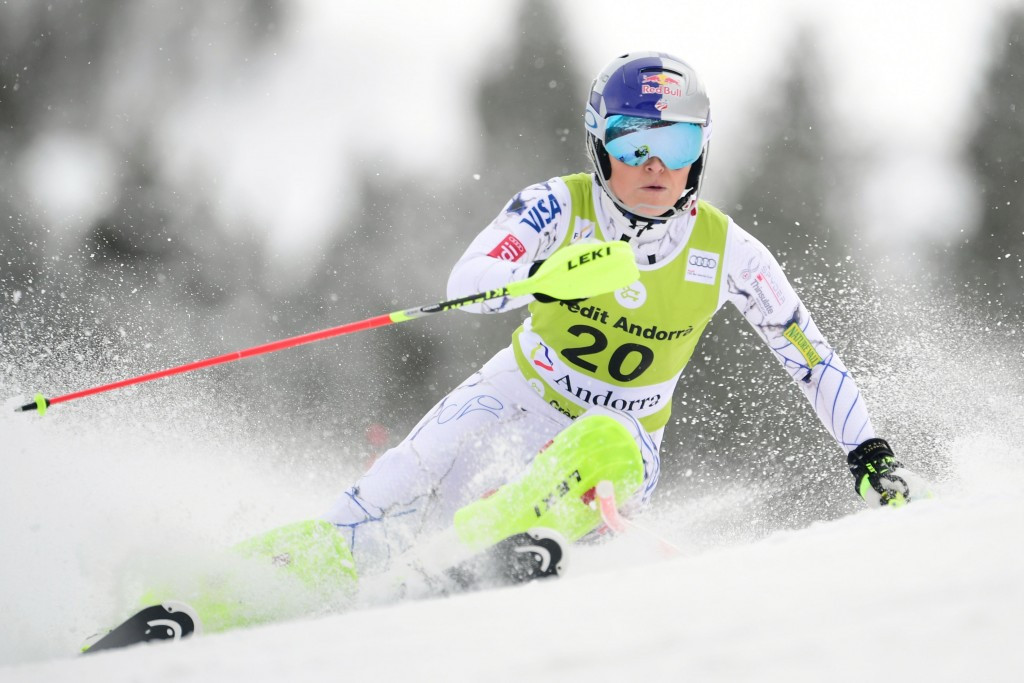 Canadian Marie-Michele Gagnon won the Alpine Combined event at the Andorran resort but the talk was centered around American Vonn, whose World Cup hopes seemed to be in huge doubt when she was carried off with a knee injury during Saturday's super-G.

It was later revealed that the 2010 Olympic downhill champion had suffered a hairline fracture but she returned from the crash in dramatic style and even posted the quickest time of 57.04 sec in today's super-G leg to lead at the halfway stage.

After the slalom run she had slipped to 13th overall but with Swiss skier Gut missing a gate during her second descent, Vonn now has a 28-point lead over her challenger.

The 31-year-old has moved onto a tally of 1235 with Gut on 1207, with eight more World Cup races scheduled this season.

Gagnon's victory came in a combined time of 1:43.66 with Switzerland's Wendy Holdener second, 0.20 back.

Third place went to Anne-Sophie Barthet of France who was 0.61 off the pace.

Vonn posted only the 23rd quickest slalom time but this is not her preferred discipline.

"I wasn’t expecting a win,” Gagnon said after a second career victory.

"I was hoping for a podium.

"That’s always a good result, and I knew that I was skiing strong."

In the men's World Cup, France's Alexis Pinturault won for the second time in Hinterstoder in Austria as he claimed the giant slalom honours to add to the race victory he collected in the same discipline on Friday (February 26).

He clocked a combined time of 2:43.88 to win with the top two in the overall standings coming in behind him.

Home favourite Marcel Hirscher, who is chasing a fifth successive World Cup title, closed in on that achievement by finishing second in 2:45.02 after his two runs.

Second-placed Henrik Kristoffersen of Norway was third in 2:45.14.

Hirscher has a dominant 1365 points on the leaderboard, with Kristoffersen on 1082 and third place Aksel Lund Svindal on 916.

The men's World Cup season now moves to Kranjska Gora in Slovenia for two giant slaloms and a slalom between March 4 and 6.

The women will also be in Slovenia, in Jasna, for giant slalom and slalom on March 5 and 6.