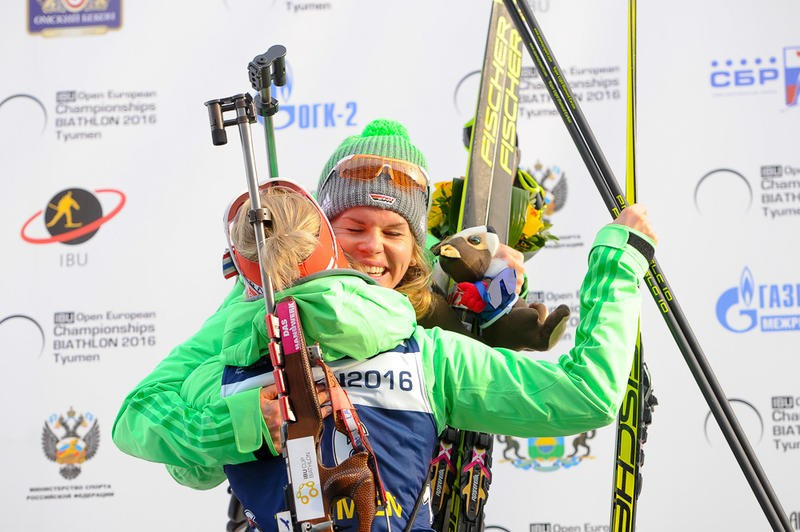 Karolin had started the better of the German duo, racing clear following a perfect round of shooting.

Even though, however, she managed to keep her aim on the range in tact, she could not prevent Nadine from overtaking her.

Nadine clocked a time of 21min 53.0sec to cross the line ahead of Karolin.

“I knew I was second after the last shooting, but I felt really good on the track today, so I hoped to win,” Nadine Horchler said.

“I knew I was battling with my sister and it was a hard fight on the last loop.

“I am so happy about the podium; it is so cool to be there not only with Karolin, but also with Annika."

Home favourite Evgeniy Garanichev powered to his second gold medal in as many days as he claimed victory in the men’s sprint race held over 10km.

Garanichev, a member of the Russian quartet which won yesterday’s relay, clocked a time of 23:40.3 to seal the title ahead of Norwegian Henrik L'Abee-Lund,.

He finished second, despite a clean shooting record.

The hosts continued their impressive medal haul at the event on home snow as Anton Babikov, who also shot clean, came through to secure the bronze medal.

Garanichev, a key cog in yesterday’s relay triumph as he anchored Russia to victory, incurred an early penalty on the first standing stage but was still able to establish a lead which proved to be insurmountable thanks to a dominant performance on the skis.

“It is a double happiness for me to score the second win here, at the home stadium,” the Russian said.

“Today I managed to work good in the competition; yes, I had one penalty, but on the track I felt really strong.”

The IBU Open European Championships is due to continue with the women's 10km pursuit and men's 12.5km pursuit on Saturday (February 27) following a rest day tomorrow.