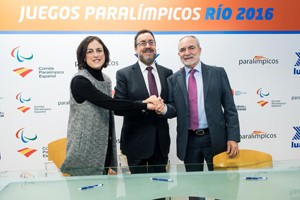 Food company ElPozo and Valencian sportswear company Luanvi are to sponsor Spain's team as they continue preparations for this year's Paralympic Games in Rio de Janeiro.

ElPozo signed their sponsorship agreement at the headquarters of the Higher Sports Council in Madrid.

They joined Luanvi, who had already agreed a deal at the company’s headquarters in Valencia.

The agreement between ElPozo and the Spanish Paralympic Committee (CPE) joins the Paralympic Sport Support Plan Objective (ADOP) and financially supports athletes in their preparation for Rio 2016.

Contributions from ElPozo and other sponsors will help provide scholarships and grants for training to athletes; help the athletes attend international competitions; support the coaches, trainers and other staff; and also assist in medical services.

The agreement with ElPozo was signed in the presence of Spain’s General Director of Sports, Oscar Graefenhain.

Luanvi will join as the official supplier of apparel for the Spanish Paralympic team.

Luanvi President Vicente Tarancón and CPE President Miguel Carballeda signed the agreement, which will help provide kit and equipment for the athletes.

The Valencian company is already working on clothing designs, due to be presented publicly in May.

CPE signed the agreement with Luanvi in collaboration with Trinidad Alfonso Foundation - a non-profit foundation whose objective is to promote the culture of endeavor in the Valencian community - to strengthen the city's link with Paralympic sport.

The Trinidad Alfonso Foundation launched its third edition of Project FER, an initiative aimed to consolidate, support and encourage athletes in the Valencian community.