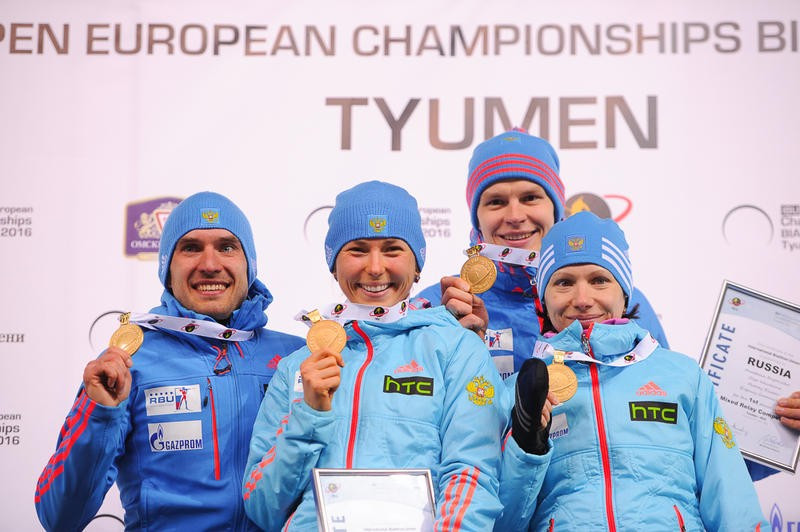 Russia claimed double gold in relay competitions on the first day of the International Biathlon Union (IBU) Open European Championships in front of a home crowd in Tyumen.

The German team were hoping to live up to their billing as pre-race favourites in the mixed 2x6 kilometre and 2x7.5 km relay event, with Nadine Horchler hitting the front in the early stages of the event.

Their nearest challengers looked like being Slovakia with little separating the two countries after the first changes, although Norway and Russia remained in pursuit.

Germany’s challenge was abruptly ended when their final biathlete, Florian Graf, only hit two targets during a station, resulting in him needing to compete penalty loops.

An excellent performance from Matvey Eliseev had given Evgeniy Garanichev a chance of catching the Slovakians on the final leg and the 28-year-old closed to within six seconds after the last shooting stage.

With the home crowd’s support, the Russian took  the lead in the race to the line, eventually winning by just 0.1 seconds after crossing the line in 1 hour 10min 56sec.

While Slovakia settled for the silver medal, Norway finished  nine seconds clear of Germany to complete the podium in 1:12:00.

"I never was an anchor in the international starts before,” said Garanichev.

“I was trying not to think about anything, was battling until the last meter and glad could win at the finish line.

“When I left the final standing, I saw the back of the rival, so I tried to do my best to catch him right away and to overcome."

Victoria Slivko and Anton Babikov had given Russia the ideal start to the Championships earlier in the day, securing victory in the single mixed relay event.

Slivko had established a 30 second advantage over their nearest challengers after the first leg of the event and the paring continued to move further clear throughout the remainder of the race.

The duo finished in a time of 36:59 to claim the gold medal.

The Championships are due continue tomorrow with the women's 7.5km and men's 10km sprint events.