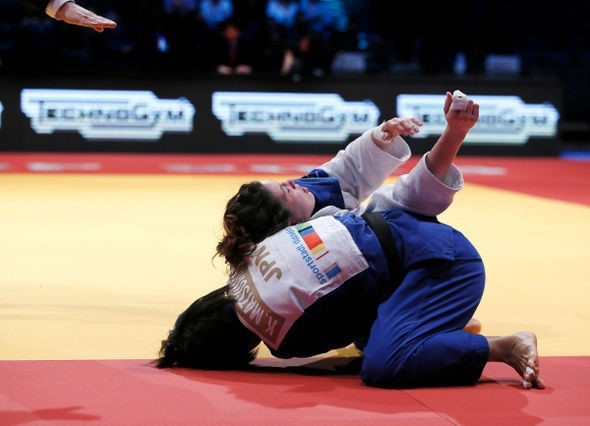 Japan's Olympic and world champion Kaori Matsumoto marked her first appearance of the 2016 International Judo Federation (IJF) season with a victory at the Düsseldorf Grand Prix.

After two-years out of the sport following her Olympic triumph at London 2012, Matsumoto showed mixed form throughout last season with a world title win in the under 57 kilogram event, followed by an early exit at the Tokyo Grand Slam.

With Rio 2016 drawing closer, the 28-year-old was hoping to get back to winning ways at the Mitsubishi Electric Halle and she looked back to her best.

She stormed into the gold medal match with an ippon win over South Korea’s Jan-Di Kim in the semi-final.

Matsumoto then sent a message to her rivals for the Olympic crown by overcoming France’s Automne Pavia, the Tokyo Grand Slam silver medallist, in the same manner to seal the fifth Grand Prix title of her career.

Kim, the gold medallist at the Paris Grand Slam earlier this month, miss out on a podium place entirely as Britain’s Nekoda Smythe Davis scored with a yuko and waza-ari to win their bronze medal contest.

Chinese Taipei’s Chen-Ling Lien won the other bronze medal, beating Rafaela Silva via a golden point decision after the Brazilian received a shido penalty in the additional period of the bout.

Earlier in the evening, Matsumoto had seen her compatriot Ai Shishime triumph in the women’s under 52kg event.

The 22-year-old filled in admirably to secure a shido penalty victory over France’s Priscilla Gneto, the result giving her a second Grand Prix title.

European Games champion Andreea Chitu of Romania claimed the first bronze medal after scoring with a waza-ari in a golden point period against Mongolia’s Bundmaa Munkhbaatar.

The second bronze medal tie was a short-lived affair as Turkmenistan’s Gulbadam Babamuratova scored an ippon against South Korea’s Mi-Ri Kim to win the contest after only 11 seconds.

It proved one of the rare lowlights for a South Korean team.

They have already equalled their gold medal haul from the Paris Grand Slam after winning the three other divisions contested tonight.

Their rush began with an unexpected success for Bo Kyeong Jeong, who earned her maiden Grand Prix title with a shido penalty win over Kazakhstan’s Otgontsetseg Galbadrakh in the under 48kg competition.

Cuba’s Dayaris Mestre Alvarez claimed the bronze medal in the same manner as France’s Aurore Climence was penalised in a golden score period.

World number four Mikhail Pulyaev of Russia ended home hopes of a medal on the opening day as he defeated Germany’s Sebastian Seidl with an ippon.

Georgia’s Vazha Margvelashvili earned a quick-fire win over Japan’s Kengo Takaichi, winning the contest in 13 seconds, to earn the other bronze medal.

The other gold medal of the day came in the under 60kg event, where South Korea’s Kim Won Jin claimed a morale boosting victory over world champion Yeldos Smetov of Kazakhstan.

Kim trailed by a waza-ari after the early stages of the bout but struck back to level the scores, ultimately claiming the win with two yukos.

Pan American Games gold medallist Lenin Preciado missed out on a podium spot after the Ecuadorian was thrown by Turkey’s Bekir Ozlu for an ippon.

The Düsseldorf Grand Prix is due to continue tomorrow with the women's under 63kg and 70kg and men's under 73kg and 81kg respectively.