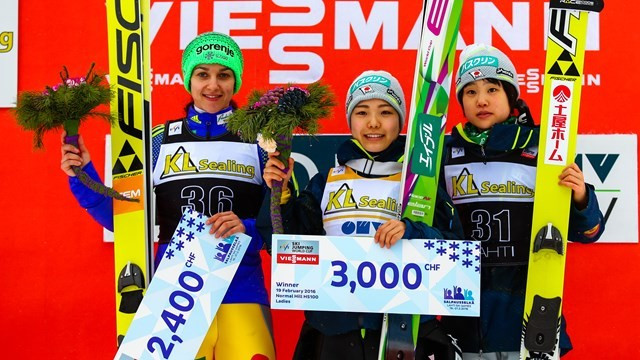 Having won 11 of the season’s World Cup competitions, the 19-year-old’s triumph was virtually assured with five events remaining, but she headed to Lahti knowing a good performance would see her add to her victories in 2014 and 2014.

A strong first jump of 96.5 metres placed her at the top of the standings and after bettering the effort with 99.5m in the second round, she ended comfortably clear of her rivals on 251.3 points.

Slovenia’s Maja Vtic secured her third consecutive World Cup podium finish after her tally of 238.7 was enough to finish as the runner-up.

With the defence of her title now out of reach, Iraschko-Stolz will aim to maintain her 190 point advantage over Vtic in the final four competitions to finish as runner-up to Takanashi.

“I am so satisfied and happy with my performance today,” said Takanashi, following confirmation of her overall victory.

“I’ve learned so much in the last years and this summer I had a really good preparation phase.

“That’s the reason why I could win my third overall World Cup title.”

The women’s World Cup is due continue next weekend with two competitions in Almaty, before the back-to-back events in Rasnov in Romania bring the season to a close on March 5 and 6.

Men’s World Cup leader Peter Prevc suffered a rare blip at the Finnish venue after seeing a first round lead slip to eventually finish the competition in fifth place on 258.7.

Austria’s Michael Hayboeck was able to take full advantage of the Slovenia’s poor second effort, as he leapt 128m and 129m to end the competition with a total of 265.4 points.

It gave the 24-year-old his first victory of the season.

The podium was completed by last year’s World Cup winner Severin Freund, with the German finishing the first of three days of competition at the venue on 259.5.