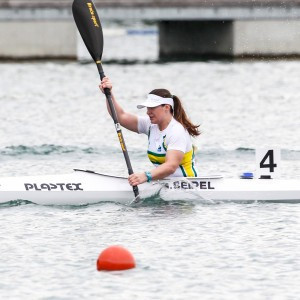 Competing in the KL2 and VL2 classifications, Seipel clocked times of 2min 34.60sec and 2:38.74 in the respective multi-class finals to add to her successes in the K1 200m and V1 200m events yesterday.

She enters 2016 fresh from a breakthrough year in 2015 which saw her win a gold medal in the VL2 V1 200m and bronze in the KL2 K1 200m at the International Canoe Federation Para-canoe World Championships in Milan.

"I have gained a lot of confidence from having such great results in Milan at [the] Worlds and gained a lot more support through Australian Canoeing," Seipel, set to be among the favourites when the sport makes its Paralympic debut at Rio 2016, said.

"It was just good to get out and see where you stand in the world and especially coming up to a Paralympic year this year.

"It is really exciting and I think the whole team did really well to come out on top of the medal tally [with three golds, one silver and one bronze].

"That has given us heaps of confidence going forward."

Seipel  is due to contest the 1,000m events tomorrow before returning home to prepare for the National Sprint Championships in Perth from March 2 to 6.

McGrath backed up his success with victory in the V1 500m multi-class final ahead of compatriots Glenn Pyne and Dean Garo.

Georgia Inglis joined Seipel on the women's winners list with victory in the KL1 K1 500m.