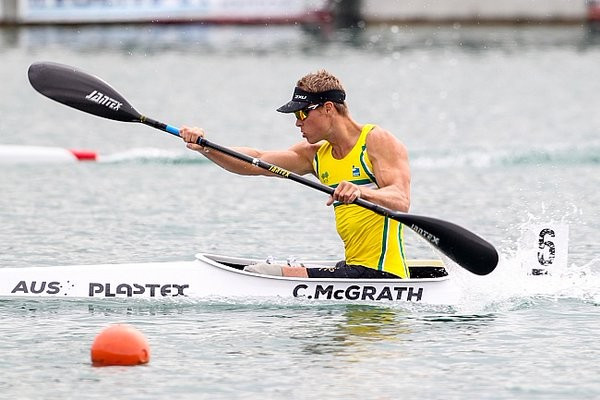 Reynolds, the KL3 world champion  dominated the women’s K1 200m multi-class final, clocking a time of 52.70sec to finish 4.07 seconds ahead of compatriot Susan Seipel, winner of the KL2 classification in 56.77,

"It was a bit messy but I got off the start really well which was good as that is something we have been working on," said Reynolds.

She will now be looking ahead to the second selection trial at the National Sprint Championships in Perth, due to take place from March 2 until 6.

Up for grabs are places when canoeing makes its debut on the Paralympic programme at Rio 2016.

"I have a new boat so it is just about getting used to the boat again, and building up strength and working hard to make sure that we are priming at nationals and then off to Rio in September," said Reynolds.

Finishing 1.24 seconds ahead of him was fellow countryman Dylan Littlehales, the winner in 43.01 to claim the KL3 class.

"I think we have two different peaks," McGrath, due to be among those competing at the International Canoe Federation Para-canoe World Championships in Duisberg in Germany in May, said.

"We have nationals peak where we do not have as much competition as we have over in Europe at worlds so I think there is definitely another level to be had going into Duisburg and again for the Games."

Earlier, McGrath claimed the men’s V1 200 title, but he felt the extra race meant he could not fulfil his full potential in the K1.

"It has been a big morning for me so that is probably one of the worst races I have done with a bit of race fatigue, but it is good to get the starts in," he said.

"I think we are half way through the domestic season and it’s a long year so I think at this stage we are at a good level and it’s good to be pushed by Dylan at this stage so it’s been good."

Littlehales, 16, beat Curtis for the first time and set a personal best, bettering his previous mark by half-a-second.

"I have been chasing him for a while now and it is always good racing against him," he said.

"In my class, I am almost uncontested sometimes because I win by a few seconds, but having Curt half a second in front, it helps drive me in the last 100 metres."

The 500m events are due to take place tomorrow.