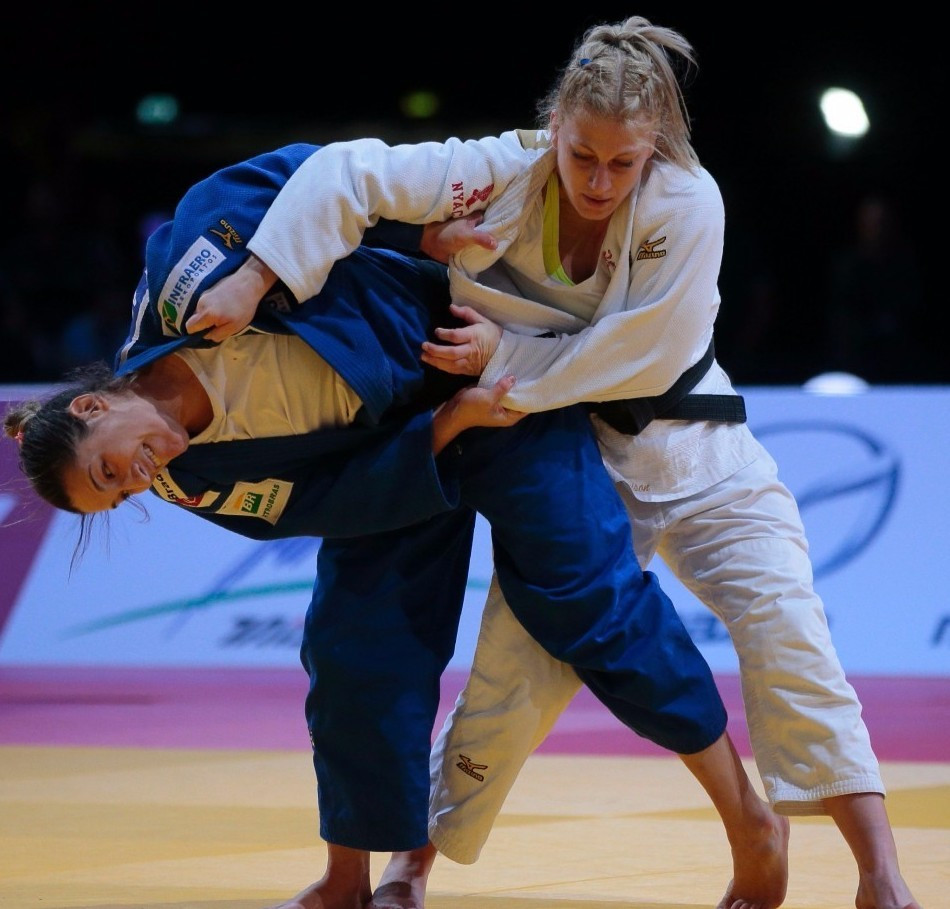 Brazil's Mayra Aguiar scored some early psychological points in her campaign to fulfil the hopes of her country and win an Olympic gold medal at Rio 2016 when she beat the United States' Kayla Harrison in the final of the under 78 kilogram at the Paris Grand Slam here today.

The 25-year-old was a bronze medallist at London 2012 when she had bee defeated by Harrison on her way to overall victory, making her the first American female to claim an Olympic judo title.

Since then, Aguiar has claimed a world title in Chelyabinsk in 2014 so her triumph here, when she threw a uchi-mata for ippon, felt like more than just another win on the build-up towards Rio 2016.

It gives her an 8-7 advantage over Harrison in head-to-head meetings and prompted plenty of soul-searching from her 25-year-old rival, currently ranked number one in the world.

"I'm not perfect," she wrote on her Facebook page after the tournament.

"I'm indecisive at times and I have moments where these truths become evident.

"Today was one of them.

"I always think that a loss is going to break me.

"Every time it happens it hurts so much and the pain feels almost unbearable, but I know from experience that this will make me stronger.

"That this moment will help to define me, and that because of this, on the day that counts, I will be perfect."

An omen for Harrison perhaps is that in 2012, on the corresponding weekend at the same Grand Slam event, Aguiar had also beaten her in the final of this event only for the US fighter to bounce back to claim the ultimate prize a few months later.

The first bronze medal was won by Britain's Natalie Powell, who beat team-mate Gemma Gibbons, the woman beaten by Harrison in that London 2012 final.

Powell's only other victory over Gibbons had come at Glasgow 2014 when she beat her in the final of the Commonwealth Games.

The other bronze medal was won by Germany's Luise Malzahn, who defeated Spain's Laia Talarn.

Japan won another three medals on this second day of this event, one of the flagship tournaments of the International Judo Federation calendar.

It took their overall total to five, putting them top of the medals table.

The winners included Megumi Tachimoto in the over 78kg category.

The match was a bit of a dour affair, settled after Ma received two yellow cards for passivity.

It was most memorable for 27-year-old Tachimoto ending the contest with a huge bandage stretched across her face following an injury early in the bout.

The bronze medals were won by France's Marine Erb following victory over South Korea's Kim Min-Jeong and The Netherlands Tessie Savelkouls after Brazil's Rochele Nunes was unable to compete due to injury.

The 23-year-old beat Or Sasson in the final after the Israeli received three yellow cards.

Harasawa's latest victory took an important step closer to claiming Japan's only place in the category at Rio 2016, where he will be the main threat to France's defending Olympic champion Teddy Riner, who did not compete here due to a shoulder injury.

Ryu Shichinohe, Harasawa's main rival for that place in Japan's Olympic team, suffered a setback when, first he was beaten in the semi-final by Sasson and then defeated in the bronze medal playoff by Dutchman Roy Meyer.

The other bronze medal was won by Brazil's David Moura, who beat Levani Matiashvili.

Japan's third gold medal of the day came in the men's under 90kg division from Daiki Nishiyama, who beat France's Alexandre Iddir in the final with an ippon.

Cyrille Maret did achieve the hopes of the French crowd, though, when he won the under 100kg category at this tournament for a third consecutive year.

The 28-year-old from Dijon immobilised his Canadian opponent Kyle Reyes for an ippon, bringing to their feet a crowd, further whipped up by Maret's celebration, which included him holding up three fingers to all four sides of the arena.

Germany's Karl-Richard Frey defeated Azerbaijan's Elmar Gasimov for one of the bronze medals, while Japan's beat The Netherlands Michael Korrel.

The first gold medal of the day had gone in the under 81kg division to Georgia's world number one vtandil Tchrikishvili.

The world champion defeated Bulgaria's Ivaylo Ivanov with a yuko, regaining the title he had won here in 2014.

South Korea confirmed their position as second on the overall medals table behind Japan with a gold medal in the under 70kg category for Kim Seong-yeon.

It took their total to seven medals, three gold and four bronze, leaving them ahead of hosts France, winner of two gold medals, one silver and six bronze.

Kim took advantage of the absence of the world's top-two ranked players in this division - The Netherlands Kim Polling and Germany's Laura Vargas Koch - to beat Japan's Haruka Tachimoto in the final for her first gold medal in a Grand Slam event.

The match was settled in golden score when Tachimoto was penalised for passivity, meaning she suffered her first defeat since December 2014.

France missed out in both bronze medal playoffs.

Fanny Estelle Posvite was unable to take her place after she was disqualified in the semi-final against Tachimoto for trying a dangerous and banned waki-gatame.

That meant Britian's Sally Conway won the medal without having to fight.

In the other playoff, Canada's Kelita Zupancic beat Gévrise Émane.

The next major event on the judo calendar is due to be the IJF Grand Prix in Düsseldorf from February 19 until February 21.