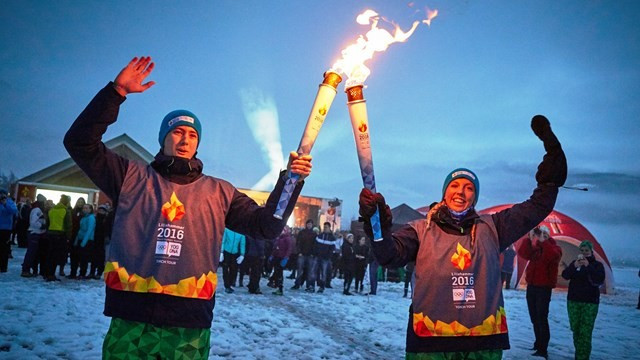 A host of Olympic and world champions across the various skiing disciplines will participate in a “learn and share focus day" during Lillehammer 2016, it has been announced.

Olympic and three-time moguls world champion Hannah Kearney of the United States and compatriot Ross Powers, 2002 Winter Olympic Games halfpipe gold medallist, will run a freestyle skiing and snowboard session as part of the day, due to take place on February 17.

Reigning Olympic downhill champion Dominique Gisin of Switzerland will then be on hand to speak to youngsters at the event during an Alpine skiing session.

Germany’s Claudia Nystad, who earned gold in Salt Lake City in 2002 and at Vancouver 2010, is set to be joined by three-time Olympic Nordic Combined champion Felix Gottwald of Austria during the cross-country “learn and share focus” event.

Gottwald will then appear alongside German Anette Sagen for a ski jumping session.

The meetings, dubbed “chats with champions”, will be held on the topic of how to prepare for a race day.

They feature as part of the extensive educational programme due to run alongside the Winter Youth Olympic Games, which begin with the Opening Ceremony on February 12 and conclude on February 21.

All athletes and team officials in each skiing discipline will be invited, with each session scheduled to take place at the Radisson Blu hotel in Lillehammer.

“The Athlete Role Models are giving back to sport by supporting the next generation of young athletes,” International Olympic Committee member Angela Ruggiero said.

“They have a wealth of knowledge to share with the young athletes garnered from their successful careers and will be a huge support to the athletes.”

As well as the educational activities for athletes, competitors and spectators will also have the chance to try several of the sports on show during Lillehammer 2016.

Qualified coaches will be on hand to help those with no experience as well as those who want to improve their skills.

The Try the Sport programme will be staged in conjunction with the FIS SnowKidz initiative.

Over 1,000 athletes are expected to compete in 70 events during the event in Lillehammer, the second edition of the Winter Youth Olympics following the inaugural Games being staged in Innsbruck in 2012.