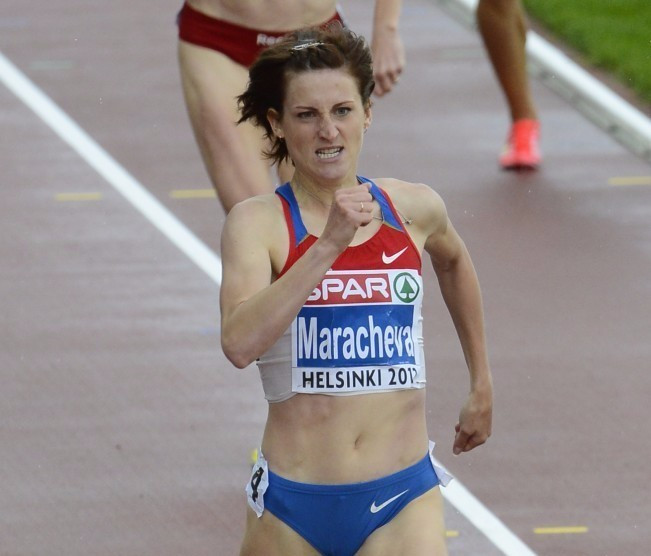 Eight athletes and a coach have been banned for doping in Russia, it has been announced.

The list is headed by 31-year-old runner Irina Maracheva. who is the most high profile athlete to be sanctioned after her silver in the 800 metres at the 2012 European Championships in Helsinki, although she originally finished third in the Finnish capital.

She was promoted up the order as the race was won by another Russian, Yelena Arzhakova, who was later banned for two years in 2013 after abnormalities were found in her biological passport.

Britain's Lynsey Sharp was upgraded to the gold medal.

Maracheva has been banned for two years alongside race-walker Anna Lukyanova, a silver medallist at the 2010 World Junior Championships in Moncton.

Middle-distance runners Maria Nikolaeva and Elena Nikulina, meanwhile, have been banned for four years each.

In addition, athletics coach Lyudmila Fedoriva has been banned for four years.

She is the mother of Alexandra Fedoriva, an Olympic gold medallist at Beijing 2008 in the 4x100m relay.

Meanwhile, cyclist Olga Khydenko has been hit with a three year and six month ban.

Nikolay Denisov and Victor Podoinikov, who are also cyclists, have both been banned for nine months, while triathlete Artem Arsenov has been hit with a four year suspension.

The announcements of the doping bans were made by the Russian Olympic Committee (ROC) and the All-Russia Athletics Federation (ARAF).

The ARAF appointed Dmitry Shlyakhtin as its new President earlier this month, following the organisation's banning by the International Association of Athletics Federations (IAAF).

This followed allegations of widespread state-supported doping within Russian athletics, as well as reports of blackmail schemes to cover up violations.

An IAAF Task Force is currently working with the country, with the governing body urging Russia to "clean house" in order to be restored to the international fold.

A large number of criteria must be met for that to happen - including the banning of all dope cheats - but no time-frame has been set for potential reinstatement.

That puts Russia's participation at this summer's Olympics in Rio de Janeiro under threat.