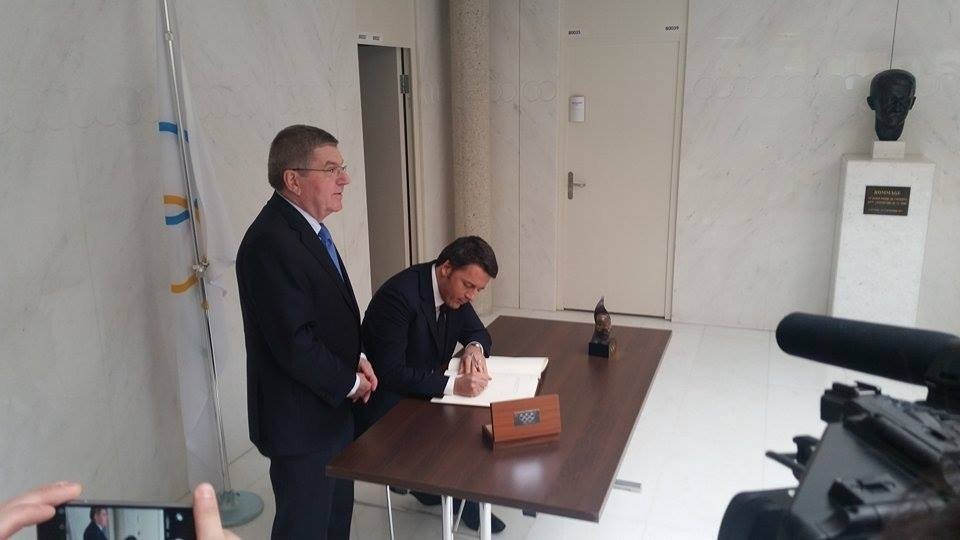 Italian Prime Minister Matteo Renzi insisted Rome is currently the leading candidate in the race for the 2024 Olympics and Paralympics here today, amid a plea for European leaders to increase their spending on sporting events.

It comes as Rome organisers release the results of a survey claiming that the bid is supported by 77 per cent of the Italian population, and by 66 per cent of Romans.

Renzi, the flamboyant 41-year-old who assumed his current role in 2014, was speaking following a lunch and tête-à-tête meeting with International Olympic Committee (IOC) President Thomas Bach.

He reiterated his full backing for the Rome bid and insisted financial problems still affecting the Italian capital will have no impact.

"Everything is good - there is a great organisation and a great team," he claimed afterwards.

"There is a good benchmark of recent events in Italy, such as the ExPo in 2015.

"I think we are also the strongest candidature for the moment, with all the respect for [rivals] Los Angeles, Paris and Budapest."

The four-horse race is gathering pace this year ahead of a decision at the IOC Session in Lima in September 2017.

Hamburg had originally been a fifth contender but withdrew following a referendum in November in which 51.6 per cent of citizens voted against the bid.

This has led to growing calls for Rome to follow suit, with a website, accessible here, having been set up by the Radicals opposition party calling for a public ballot.

Rome officials insist they will not have a referendum and the survey results, carried out by polling firm IPSOS based on 2,200 interviews, helps back this view, they claim.

"The consensus stems from the perceived opportunity that the Games represent in triggering employment, as well as in promoting a positive image of the country at the international level; while at the same time fostering the city’s infrastructural development and delivery of services to its residents," a statement today claimed.

Renzi, speaking in both Italian and English, went a step further in encouraging European countries to invest in sport at a time of heightened economic and security concerns.

"I think European countries must show a model," he said.

"My personal position is that for every euro invested in security, defence, cyber security and technology, we can invest euros in culture, education, research and sport.

"I believe this is very important because in our suburbs we lost, in the past, in Europe, a lot of contact with the people.

"You think about Paris, about Brussels and London.

"We can, absolutely, invest in infrastructure and sport.

"For this reason, this is the time in which we can combine together: sport, culture, education and security."

The IOC has, of course, heard similar Italian enthusiasm before only to be left disappointed.

Former Prime Minister Mario Monti withdrew Rome's bid for the 2020 edition of the Olympics after assuming office in 2012, claiming it wasn't affordable at the height of the European financial crisis.

Italian politics is famously volatile, and if Renzi was to cease being Prime Minister it is possible his replacement could be less supportive.

This is what happened during the 2020 race, when Silvio Berlusconi, who has recently announced plans to return to politics, was replaced by the less supportive Monti.