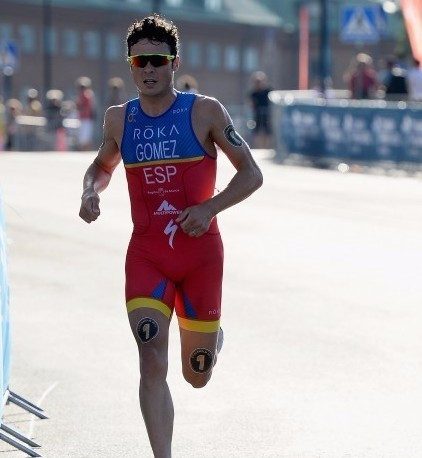 The 32-year-old finished on the podium at eight of the 10 World Triathlon Series events throughout the year, recording victories in the Yokohama and Stockholm legs.

His greater consistency saw him win the title ahead of his compatriot Mario Mola for the second consecutive year, adding to previous triumphs in 2008, 2010 and 2013.

Having claimed the Olympic silver medal at London 2012, Gómez will be vying to make the step up to the top of the podium at Rio 2016 and the omens look promising, with the Spaniard having won the test event last August.

Switzerland’s Nicola Spirig will be heading to Rio de Janeiro with the aim of defending the Olympic title she claimed four-years ago, dramatically beating Sweden’s Lisa Norden in a photo-finish.

Spirig was named as the recipient of the women’s European Triathlete of the Year award following his victory at the inaugural European Games in Baku, Azerbaijan.

Unlike her Olympic triumph, Spirig broke clear of a strong women’s field to win comfortable win in a time of 2 hours 00min 28sec.

Both Gómez and Spirig received their awards at the European Triathlon Union’s (ETU) awards gala in Paris, an event attended by Presidents and representatives from 33 European National Federations.

ITU President Marisol Casado was among those in attendance and the International Olympic Committee member praised the contribution of unsung heroes who work within various committees, despite holding down full-time jobs, to help drive the success of the sport.

The gala also saw British Triathlon receive the National Federation of the Year award, with their success at age-group and elite level acknowledge.

Croatia received the Developing National Federation award having embraced the work done by ETU development camps, as well as their support of newly-trained coaches and technical officials.

Bela Varga and Jorge García were named as the Technical Officials of the Year having ensured the European Games triathlon events ran successfully.

The European Championship in Geneva was named the best ETU event of the year.

The gala was hosted by the French Triathlon Union, with their President Philippe Lescure playing tribute to their triathlete Laurent Vidal, who died at the age of 31 in November.