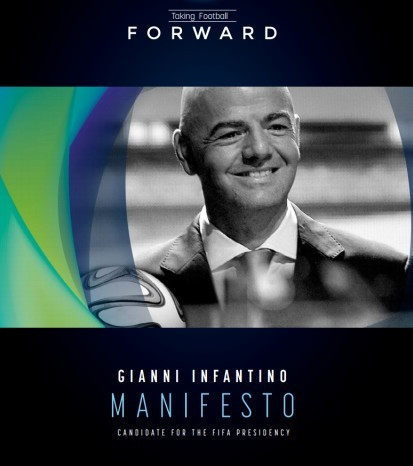 FIFA Presidential candidate Gianni Infantino will explore the possibility of hosting World Cups across entire regions rather than limiting the tournament to one or two countries if he is elected as the head of world football’s governing body.

Infantino, the general secretary of UEFA who revealed his manifesto today, believes the move would help spread the cost of staging the quadrennial competition and says “each Confederation shall have to wait at least two editions before being able to host the World Cup again”.

The Swiss, who had previously claimed he would withdraw from the race if trusted ally and banned UEFA President Michel Platini was allowed to stand, also reiterated his vow to expand the World Cup to 40 teams from the current 32.

Infantino, along with Frenchman Platini, oversaw the process of having 24 teams in the European Football Championships, instead of the usual 16, for this year’s edition of the event, which takes place in France.

The 2020 tournament will then be the first to be played across several countries rather than one country.

Japan and South Korea co-hosted the 2002 FIFA World Cup, which remains the only time the competition has been staged by more than one country.

“FIFA should investigate the possibility of organising the World Cup not only in one or two countries but in a whole region, so enabling several countries to enjoy the honour and benefits of hosting the World Cup,” Infantino said in his manifesto, entitled “Taking Football Forward”.

The 45-year-old, who has held his role as general secretary of European football’s governing body since 2009, has also attempted to appeal to FIFA’s 209 Member Associations by pledging to give them more money.

The promise has also been made by the other candidates and Infantino says each of the Federations will receive $5 million (£3.5 million/€4.5 million) during each four-year cycle.

He has also vowed to provide them with a further $1 million (£703,000/€920,000) to cover travel costs in a bid to increase participation of countries in international and regional tournaments.

Strengthening the use of video technology in the sport is among other promises outlined in his three-part manifesto, split into reforms and good governance, democracy and participation and football development.

This is in direct contrast to the views of Platini, who was banned for eight years along with FIFA President Sepp Blatter for various ethics breaches in December, as the former Juventus star has often remained cautious on the use of technology in football and claimed back in 2014 that it would "kill" the game.

Infantino has vowed to increase transparency within the organisation, with endemic corruption still under investigation by criminal investigators, amid the most turbulent period in the history of the governing body.

“Clearly rebuilding trust in FIFA is key and it is imperative that the organisation, and everyone linked to it, embraces reforms to ensure FIFA becomes a modern, credible and transparent world governing body,” he said.

“These reforms have to be both structural and cultural and we need to have much stronger transparency in financial management.

"I have outlined a raft of reform measures including the creation of a new FIFA Council; term limits for FIFA serving officials, including the President; the appointment of independent voices to key FIFA Committees; remuneration transparency for senior FIFA members; the appointment of a Chief Compliance Officer; and a fully open tendering process for commercial and operational contracts.

"Taken together, these changes will, I believe, put FIFA on the path towards restored credibility and integrity."

Infantino added: "If I were to be elected, I also want FIFA and its Member Associations to look at significantly strengthening football development programmes, growing the FIFA World Cup, having a full debate on the use of technology in the game and creating a fair and transparent transfer system.

“I would also create new initiatives to utilise current and former players to promote football as a force for social good."