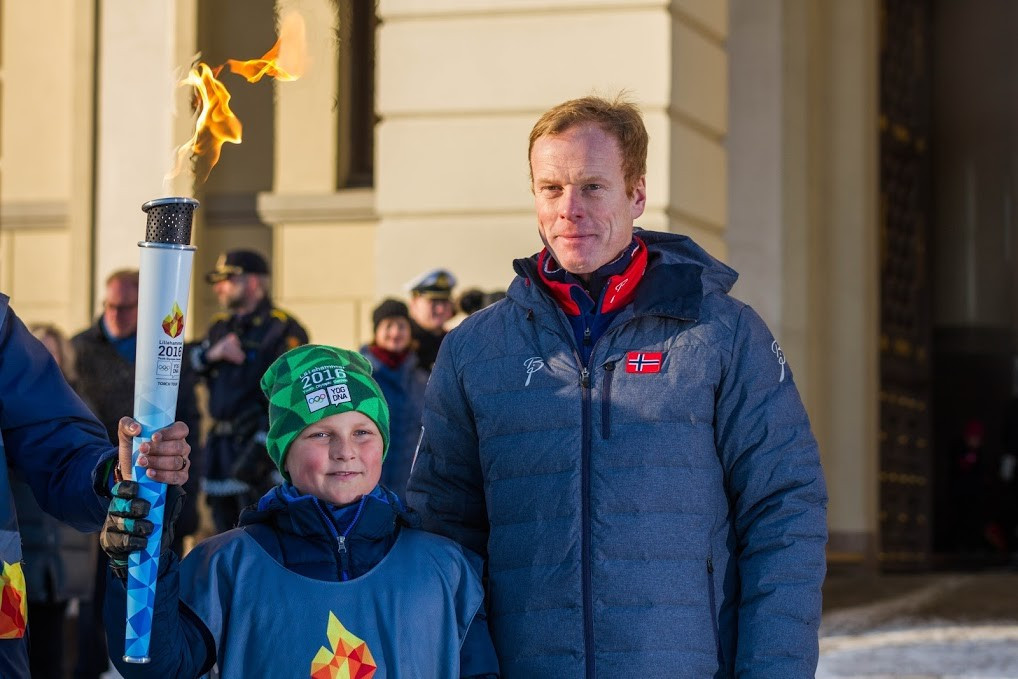 The Lillehammer 2016 Winter Youth Olympic Games (YOG) Torch Relay has continued in Oslo, coinciding with the 25th anniversary celebrations of Queen Sonja and King Harald V as regents of Norway.

Starting at the Royal Castle in Norway’s capital, the Torch was carried by a number of famous Norwegian sports personalities, including eight-time Olympic gold medal-winning cross-country skier Bjørn Dæhlie.

Dæhlie carried the torch alongside Prince Sverre Magnus of Norway, the ten-year-old younger child of Crown Prince Haakon who is third in line to succeed his grandfather, King Harald.

Prince Magnus is the younger brother of Princess Ingrid Alexandra of Norway, who is due to carry the Olympic Torch into the Opening Ceremony of Lillehammer 2016 along with six-time Olympic gold medal-winning cross-country skier Marit Bjørgen.

Also taking part were Lillehammer 2016 participants and 19-year-old Sajandan Rutthira, who was crowned "Young Changemaker of the Year" at a recent Sports Gala celebrating volunteers in Norway.

The Gala was headlined by Crown Prince Haakon, a member of the Lillehammer 2016 Advisory Board, who spoke to the 1,500 volunteers present.

Amid the celebrations in Oslo, thousands of youngsters gathered outside the Royal Castle to try their hand at a variety of winter sports, including cross-country skiing, snowboarding, biathlon, ski jumping and figure skating.

"To see the sparkle in the eyes of our young leaders who will volunteer during the Games was fantastic," said Lillehammer 2016 chief executive, Tomas Holmestad.

"We have a Crown Prince in the Organising Committee, a Princess who will light the Olympic Flame at the Opening Ceremony, and a King who will do the official opening of the Youth Olympic Games in Lillehammer.

"It shows their amazing commitments to the Games - three generations of the Royal Family are involved.

"To be allowed to celebrate the King and the Queen with the Olympic Flame, young volunteers and a new generation of performers was fantastic.

"The event at the Palace Square really highlighted what YOG DNA is all about; youths doing sports together, on their own terms."

Tom Tvedt, President of the Norwegian Olympic and Paralympic Committee and Confederation of Sports, added: "It was an amazing day.

"For me this reminds me of the atmosphere from the Lillehammer Olympic Games in 1994.

"All the parents who brought their kids and especially all the volunteers who have put this together impress me.

"It’s fantastic that the King and the Queen decided to transform the King’s garden into a sports arena."

The Torch Relay is set to conclude at the Opening Ceremony at the iconic Lysgårdsbakken ski jumping hill on February 12.

Lysgårdsbakken also hosted the Opening Ceremony of the 1994 Winter Olympics in Lillehammer and the lighting of the Youth Olympic Games Flame will mark the 22nd anniversary of that occasion.

The Relay will see the Torch visit 19 Norwegian cities in all before arriving at its final destination.