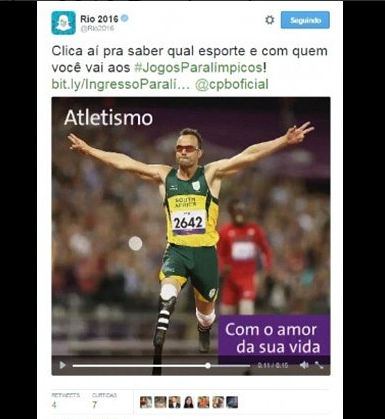 Convicted murderer Oscar Pistorius has reportedly been used in a promotional video for the Rio 2016 Paralympics - which was posted on the Games' official Twitter page.

The 29-year-old South African blade runner is a pariah in sport after shooting dead his girlfriend Reeva Steenkamp on Valentine's Day in 2013.

However, the six-time Paralympic champion is said to have featured in the video, which reportedly showed him winning the T44 400 metres title at London 2012.

He was said to be shown alongside several other athletes using the slogan "with the love of your life".

The tweet on the @Rio2016 Twitter page was reportedly deleted after Pistorius' inclusion was pointed out and no explanation from Rio organisers has yet been provided.

The double amputee instructed his lawyers to lodge appeal papers earlier this month in a bid to have his murder conviction overturned.

He is currently awaiting a new sentence after an original verdict of culpable homicide - the equivalant of manslaughter - was upgraded to murder in December.

His initial sentence was five years in jail, but he was released from prison and placed under house arrest on October 19 having been eligible under the South African law of "correctional supervision".

He is now facing returning to jail for a minimum term of 15 years imprisonment.

No timeframe has yet been set on when his appeal may be heard in court.

Pistorius, arguably the world's most famous Paralympian, shot Miss Steenhamp four times through a toilet door in a case which shocked the world of sport.

When overturning the culpable homicide verdict, Judge Aubrey Ledwaba said he must have known that firing into the toilet would have killed whoever was inside.