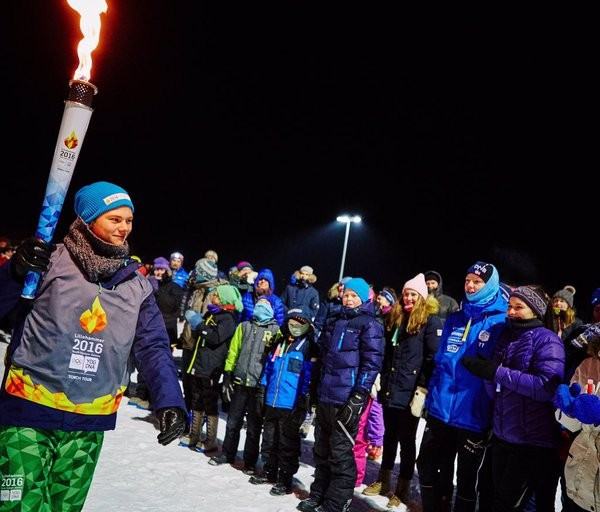 It started with the Olympic Flame being displayed in a local hall in the municipality, where 1,300 people were then given a session about youth leadership in sport.

The session featured a series of video messages, including one from Crown Prince Haakan of Norway.

Other activities were also held and those who participated were entered into a competition to win a number of prizes from Olympic Games TOP Sponsor Samsung, such as a big-screen television, a tablet and a smartphone.

Following the earlier indoor activities, the event switched to the outdoors as a small gathering of people braved the cold and took part in a six-leg relay.

The first leg involved a dog sleigh with a young driver from the local sport club before three young leaders representing local sport clubs then had the opportunity to carry the Torch.

Alta Mayor Monica Nilsen had a short leg with the Torch before the relay was completed by changemaker of the year in Finnmark, the area Alta is located, Trygve Kjærland Olsen, who lit the Torch in the city centre as the Northern Lights came into view.

“The events today showed an amazing enthusiasm for the YOG and for youth leadership in a part of the country who is as far away from Lillehammer as Athens geographically, but still feel involved in this nationwide project to put focus on youth and youth leadership,” Lillehammer 2016 chief executive Tomas Holmestad said.

“In addition, the nature in this part of Norway is absolutely amazing, maybe the most spectacular in the world.

“We will in the coming hours and days see some fantastic pictures on our Facebook and Instagram pages from the flame in fantastic surroundings in Northern Norway.

“We are absolutely thrilled about this first day and do look so much forward to the way forward.”

Today was the first in a series of celebratory events due to take place during the Torch Relay, concluding at the Opening Ceremony at the iconic Lysgårdsbakken ski jumping hill on February 12.

Lysgårdsbakken also hosted the Opening Ceremony of the 1994 Winter Olympics in Lillehammer and the lighting of the Youth Olympic Games Flame will mark the 22nd anniversary of that occasion.

The Relay will see the Torch for the event visit 19 Norwegian cities before arriving at its final destination.

Today’s event came after Crown Prince Haakan of Norway headlined a Gala celebrating volunteers in Norway on Saturday (January 9) designed to coincide with the arrival of the Youth Olympic Games Flame in Lillehammer.

The Norwegian heir, a member of the Lillehammer 2016 Advisory Board who lit the cauldron at the Opening Ceremony in 1994, spoke to 1,500 volunteers at a special sports Gala.

As well as performances by Norwegian artist Mo and rapper Sirius, others in attendance during the day included International Olympic Committee Coordination Commission chair Angela Ruggiero, the American ice hockey star who won medals at four successive Olympics before retiring in 2011.

The Youth Olympic Games Flame was lit on December 1 in the Panathenaic Stadium in Athens.