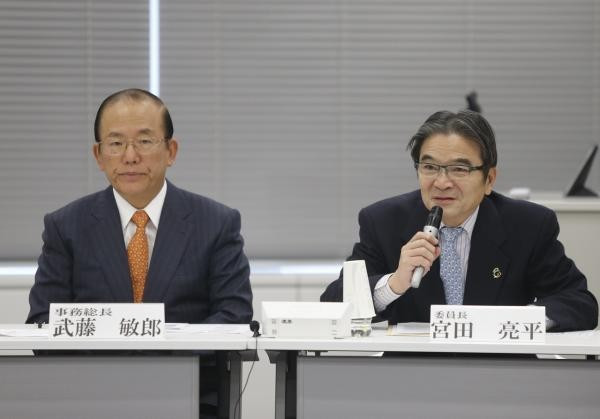 The four shortlisted designs for the new Tokyo 2020 logo have been chosen after the Emblems Selection Committee conducted its third round of screening.

The Committee will release the four potential logos once they have verified they do not infringe with other trademarked designs in Japan and across the world.

This comes after the original emblem, designed by Kenjiro Sano, had to be scrapped last September after Belgian designer Olivier Debie claimed it resembled his Théâtre de Liège logo too closely.

"The number of entries has now been narrowed down to a shortlist of four," a statement from Tokyo 2020 read.

"However, if any of these four entries are found to resemble any existing designs during the trademark verification processes, another entry will be selected to the shortlist of four."

Tokyo 2020 also urged those who had been shortlisted to refrain from making their designs public before they have been fully verified, or risk disqualification from the competition.

“All of the four candidates are so excellent that it is difficult to say which is better,” Ryohei Miyata, chairman of the Tokyo 2020 Emblem Selection Committee said.

The four were chosen after an extensive selection process, with nearly 15,000 entries received before the closing date on December 7 after the competition was opened up to all Japanese citizens over the age of 18.

The list of potential designs was then reduced to 311 in the first stage of the process, before being further narrowed to 64 in the second stage.

During the third round of screening, the Emblems Selection Committee’s 21 members gave either zero, one or three points to each of the designs, and the 64 were eventually whittled down to 19.

Those logos then underwent further scrutiny as the Committee used the same process to cut the list to 10, before each of the members chose their three preferred designs, which eliminated one further emblem.

In order to choose the final four, the members of the Committee gave their backing to their preferred designs by a show of hands.

Once the Committee is satisfied there are no concerns of plagiarism, the four designs will be officially registered and they will then be revealed on the Tokyo 2020 website, with the final screening process, where the new emblem will be chosen, due to be held in March or April.

The logo for the Tokyo 2020 Olympics and Paralympics has caused the Organising Committee several issues as, following the scrapping of the original logo, they faced criticism by opening up the process to find the new logo to any Japanese adult.

Organisers encouraged a greater number of entries during the re-run to boost interest in the Games, but faced criticism from the American Institute of Graphic Arts for the open contest's "speculative" nature.

They object to the competition as it is not offering proper professional fees and claim that a "remarkable" design can only be the result of a designer working directly with their client.

They also argue that opening the competition to non-professionals "disrespects" the design profession and that the cash prize of ¥1 million (£5,400/$8,200/€7,600) on offer to the winner is not enough for a logo which will be seen across the world millions of times.