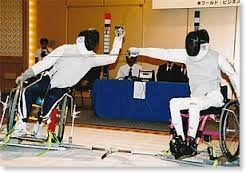 A Japanese National Championships showcasing both wheelchair and able-bodied fencing has been hailed as evidence of the growing profile of the Paralympic version of the sport ahead of the Tokyo 2020 Games.

The country is bidding to use its hosting of the Games to improve in a sport in which its only Paralympic medal came at the Tokyo 1964 edition, thanks to S. Aono, S. Harasawa and S. Saito who claimed team sabre silver.

Demonstrations are being held all over the country in an effort to recruit new fencers and to promote the sport.

Such events are planned for Tokyo in January, Kobe in February, Hokkaido in July and Fukuoka in November.

“Fencers are practicing hard with progress and they performed well today," he added.

"This was really an important moment for Japan’s wheelchair fencing history."

Four fencers competed, with Michinobu Fujita facing Naoki Yasu, a former wheelchair basketball player who only switched sports 10 months ago, in the final.

“I felt really nervous and excited when the background music goes off and the game started," Yasu said.

"This was indeed a great experience for me, and I was aware of my weakness and insufficiency.

"With only four years to go, I shall train hard to get my body strong, improve my technique and be prepared for the 2020 Paralympics."