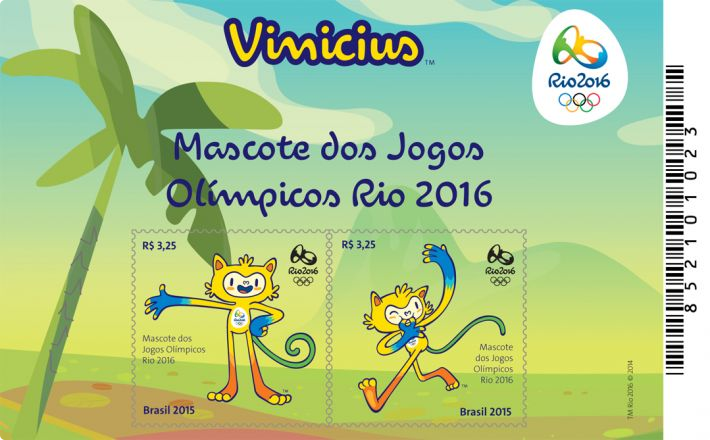 The third and final batch of Rio 2016 commemorative postal stamps has been launched, featuring Olympic and Paralympic mascots, Vinicius and Tom.

While the 11 new sport-themed designs pay homage to 10 Olympic and one Paralympic discipline, there are also four mascot designs, two for Vinicius and two for Tom.

The Vinicius and Tom stamps are likely to become valuable collectors' items as they are the first Olympic and Paralympic Games commemorative stamps to be inscribed in braille.

The mascot stamps were unveiled during the recent Rio 2016 tennis test event, shortly before an exhibition match between Thomaz Bellucci and Orlando Luz, both of Brazil.

The sports-themed stamps were launched during the Brazilian Tennis Awards, which took place after the test event at the Gran Mercurio Riocentro Hotel in Barra da Tijuca; close to the Olympic Park where the new Olympic Tennis Centre is based.

They feature the sports of athletics, beach volleyball, equestrian, gymnastics, hockey, judo, modern pentathlon, sailing, shooting, tennis and Paralympic swimming, and complete the set of 31 designs in recognition of the fact that the Rio 2016 Games will be those of the 31st Olympiad.

The first 10 designs were unveiled in March, followed by the next 10 in August.

The stamps can be bought at Brazilian post offices, while Brazilian residents can also buy them online by clicking here, or by emailing [email protected]