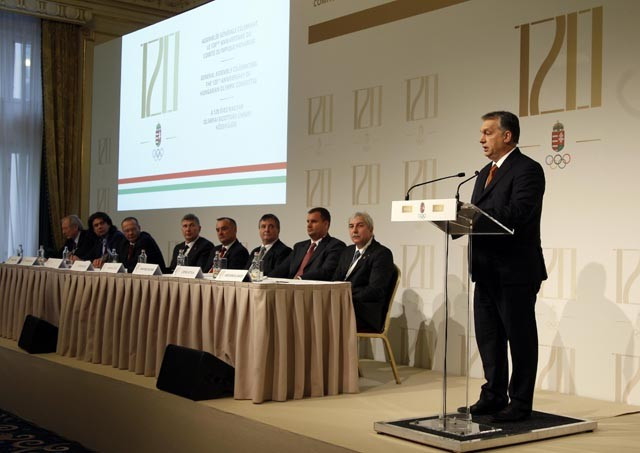 A successful bid from Budapest for the 2024 Olympics and Paralympics would be a Games for Central and Eastern Europe and mark the 35th anniversary of the collapse of the Soviet Union, Hungary''s Prime Minister Viktor Orban claimed here today.

Orban used the visit of International Olympic Committee (IOC) President Thomas Bach to show he was fully behind the Hungarian capital's campaign.

He delivered the key-note address at the Ceremonial General Assembly of the Hungarian Olympic Committee, which is celebrating its 120th anniversary, to specially invited audience including many of the country's gold medallists, as well as Bach.

"Selecting Budapest would not only be a new city and country for the Olympic Games, but put the region on the map," said Orban.

"We want to organise the first Central Eastern Europe Olympics."

The only Summer Olympics to have been held in Eastern Europe so far was at Moscow in 1980, an event boycotted by 65 countries in protest at the Soviet Union's invasion of Afghanistan.

Hungary played a leading role in the end of the Soviet Union when it re-opened its previously-restricted border with Austria in 1989, helping accelerate the collapse of the Eastern Bloc.

“Twenty twenty four will be 35 years after we shook off the shackles of oppression and celebrated our freedom,” said Orban.

“Organising an Olympic Games would be the pinnacle of this historical process.

"We are not only competing for ourselves, but representing the whole region.

"Hungary believes that sports are always more important than any political interests and it can never become a stage for political battles."

Hungary has won a total of 476 medals in the Summer Games since competing in the very first Modern Olympics at Athens in 1896, ranking it eighth on the all-time list.

No country has won so many gold medals without hosting the Games.

Budapest was persuaded to bid for 2024 following the adoption last year by the IOC of Agenda 2020, which promises to offer cities more flexibility in hosting the Olympics and Paralympics, including using existing facilities, so they are not so expensive.

“Hosting the Olympics Games is no longer the privilege of the world’s 20 biggest cities - we are ready to seize the opportunity,” said Orban.

“The Olympics is a passion for Hungarians.”

Bach claimed Agenda 2020 was launched to help smaller cities, such as Budapest.

If Budapest is successful Hungary would be the smallest country to stage the Olympics since Helsinki in 1952.

“It has made it easier and less costly to bid and it opens the door to countries and cities like your’s,” Bach told the General Assembly.

“We are very encouraged by your bid and we welcome Budapest to the competition.