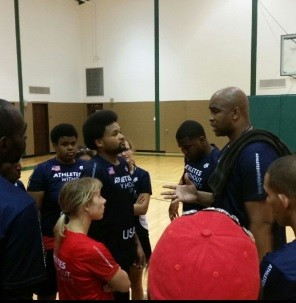 Former National Basketball League (NBL) star and Leon Trimmingham has been named as the third ambassador for the International Sports Federation for Persons with Intellectual Disability (Inas).

Trimmingham, who played in 14 countries during his professional career, including the Philippines, Spain, Japan, South Korea, Israel, Argentina, Germany, Saudi Arabia and France, and now coaches the United States Basketball Team for athletes with an intellectual disability, will be an ambassador for the Americas region.

He has overseen a period of success for the American team as, under his guidance, they have been able to field their first-ever men and women’s US basketball sides in national and international events.

It is hoped his appointment will enhance Inas’ global profile and will help to continue the support for intellectually disabled athletes.

“I’m delighted to become an ambassador for INAS and to help grow opportunities in sport for para-athletes with an intellectual disability,” Trimmingham, who played for three-times NBL winners the Sydney Kings, said.

“I feel immensely proud of my voluntary role as program director and coach of the USA ID Basketball team.

“I have enjoyed a career in basketball that has allowed me to compete around the world, and the excitement and privilege of taking part in high-level sport is something that I believe everyone should have a chance to enjoy.

“As the world governing body, INAS provides that opportunity for people with an intellectual disability, and I am very proud to support them.”

The American follows Paralympic gold medallist Jessica-Jane Applegate of Britain in taking up an ambassadorial position with Inas.

Applegate, winner of the S14 200 metres freestyle at London 2012 and was her country's only S14 Paralympic champion at the Games, partnered with the organisation in November.

She joined compatriot Andy Turner, Commonwealth Games 110 metres hurdles and European champion in 2010, who was the first Inas’ ambassador to be appointed.

He won bronze at the 2011 World Championships in Daegu and represented Britain at three Olympic Games.