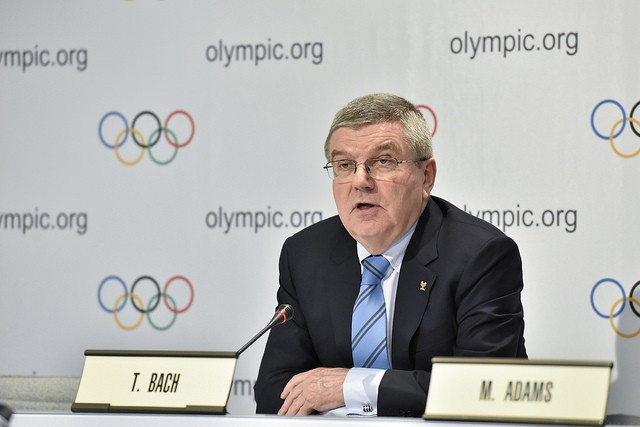 Recent scandals surrounding the International Association of Athletics Federations (IAAF) and FIFA are not the same and concern “different issues”, International Olympic Committee President Thomas Bach claimed here today as he expressed confidence that steps are being taken in the right direction to address the problems within both governing bodies.

The IAAF and FIFA have been embroiled in doping and corruption crises of late, with criminal investigations being launched into both organisations.

It was confirmed today that French prosecutors are investigating how the 2021 IAAF World Championships were awarded to Eugene in the United States without a formal bid process taking place.

The United States has never hosted the event.

IAAF President Sebastian Coe, vice-president when the event was given to the American city in April, defended the decision in an interview with BBC Radio Four today, insisting it was legitimate and that world athletics’ governing body “did not have cities like Miami or Chicago falling over themselves to put themselves forward”.

The French investigation centres on “whether corruption offences, money laundering or a conspiracy to benefit from criminal association have been committed in France”, according to the French Ministry of Justice.

Due to the fact that athletics and football are two of the biggest and most popular sports in the world, comparisons have been drawn between the scandals in the governing bodies, though Bach insisted a comparison is unfair.

“With all due respect, the problems are different at least up until now and concern different issues,” Bach said.

"We are seeing good cooperation between WADA and the IAAF."

Coe, whose predecessor Lamine Diack remains the subject of an investigation in France over allegations he accepted money to help cover up doping tests involving Russian athletes, also dismissed suggestions the crisis his sport faces is bigger than the scandal engulfing FIFA.

“I don't actually believe that,” he said.

“I'm not walking away from the seriousness I'm confronting but we are talking about a criminal investigation that is looking at a handful of people.

“That's of no comfort to me because I'm still having to do the things I'm doing now on an hourly basis to make changes.”

The criminal investigation into widespread corruption within FIFA took another dramatic turn last week when a further 16 officials were indicted by the United States Department of Justice.

The awarding of the 2018 and 2022 FIFA World Cups to Russia and Qatar also remains under criminal scrutiny, while President Sepp Blatter and UEFA head Michel Platini are currently serving 90-day suspensions from football.

Bach admits the IOC remain “concerned” with the state of FIFA, though he feels the new set of reform proposals, put forward by the Reform Committee led by François Carrard and unanimously approved by the FIFA Executive Committee last week, are a “sound basis for the future” of the body.

“Not only is the IOC concerned but the sports federations across the world are also concerned,” he said.

“We continue to be concerned especially if the procedures carry on and on.

“Week after week there is more bad news but the reforms are definitely a great step in the right way.”

The IOC Executive Board, which concluded its three-day meeting here today, urged FIFA to “take all necessary measures to clarify and resolve all the pending issues as soon as possible by further engaging with the relevant authorities" in a statement.