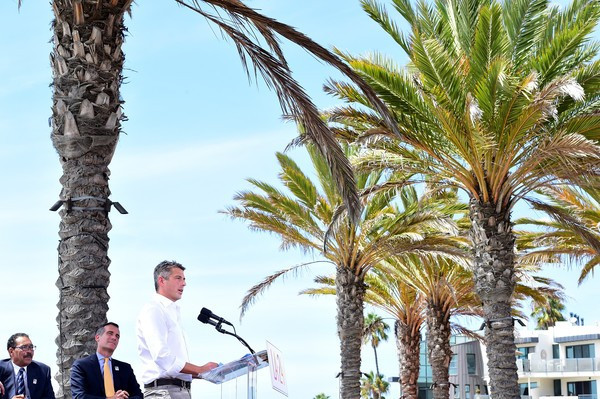 There will be "no greater honour" for Los Angeles than to host the 2024 Olympic and Paralympic Games, bid chairman Casey Wasserman told insidethegames here today.

The city faces competition from Budapest, Paris and Rome in the race to stage the Games with the International Olympic Committee (IOC) due to elect its chosen host at its Session in Lima in 2017.

Hamburg recently dropped out of the running after residents voted against the city’s candidacy at a recent referendum, continuing a growing trend in recent times.

Asked whether it is now harder than ever to secure the hosting rights to an Olympic and Paralympic Games, Wasserman described the process of competing and winning as a "great challenge".

A poll carried out by the United States Olympic Committee (USOC) in early August showed that 81 per cent of local citizens in LA supported a bid, giving it unparalleled support among the cities bidding.

If successful, LA would become the second city after London to host the Olympics three times, having previously staged them in 1932 and 1984.

"It’s an event that brings out the best in people and brings out the greatest cities in the world," Wasserman, on a short visit to the offices of his sports marketing firm, the Wasserman Media Group, in Britain's capital, told insidethegames.

"That’s a fierce competition that we’re excited to be a part of.

"LA is a passionate supporter of the Olympic Games, whether we’re fortunate enough to win or not.

"We have almost unanimous support among our people and 81 per cent approval is certainly compelling.

"We’re excited for the next two years and I’m certain we’ll be in that room in Lima, Peru, competing with other cities, and there will be no greater honour for our city than to host the Olympic Games in 2024."

All four candidates have until February 17 next year to submit guarantee letters and other documents to the IOC, with details about venue plans as well as early proposals regarding the Olympic Village also required at that time.

Los Angeles may need to find a new site for its proposed Olympic Village as they could be priced out of their first choice.

The 125 acres of land at the LA Transportation Center had been earmarked as part of the bid, with the site lying close to the LA River, but LA 2024 admitted last month that it's looking at several other locations.

Although Wasserman was unable to offer any updates in this regard, he insists the Bid Committee is "doing exactly what we should be doing".

"We’re getting ready for our first submission in February," he said.

"I think that’s tracking very well and we’re working hard to make sure people start to know a little bit about us; who we are and what we stand for.

"That’s a two-year process obviously, so we’re in the early days of that.

"But I think we’ve had a good first quarter, if you will, to that process."

Sykes, who has held several titles within investment banking giants Goldman Sachs, undertook the full-time position with immediate effect and is working closely alongside Wasserman.

The 57-year-old is tasked with aiding the day-to-day running of LA’s attempt to bring the Summer Olympics to the United States for the first time since 1996 in Atlanta.

"In any kind of work environment, you need people who compliment your skills and share a vision," said Wasserman of Sykes’ appointment.

"Gene’s successes and talents are well-chronicled and the opportunity to have him as the day-to-day leader of the bid is an extraordinary thing for LA and for our bid.

"He brings a different perspective which is important and I think he and I together will make a great team going forward for the next two years, so, we’re excited.

"We need a team of people because it’s a big job and a big responsibility and we take that really seriously, and so we want to have the absolute best people we can attract to pursue this opportunity."