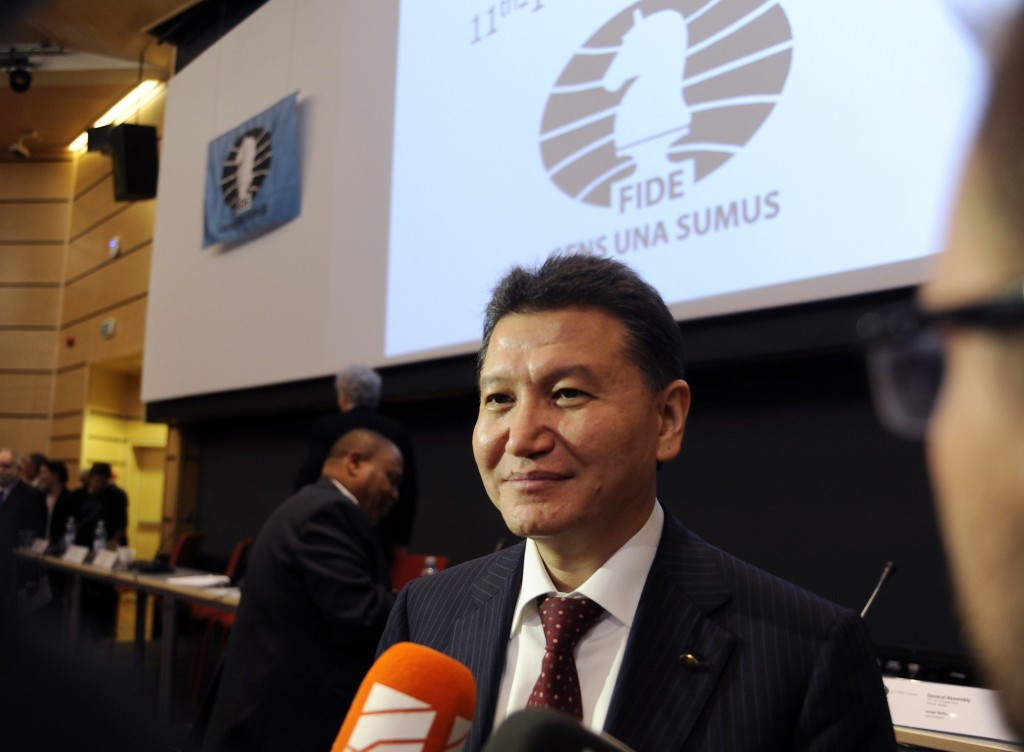 Kirsan Ilyumzhinov, the Russian President of the World Chess Federation (FIDE), has asked for his authority to be temporarily suspended after he was placed on a United States blacklist.

The 53-year-old businessman and politician has been head of the FIDE since 1995 but today asked its Presidential Council to effectively let him step down after his name appeared on a US sanctions list last month for allegedly providing support to the Syrian Government.

The US Department of the Treasury named the multi-millionaire a Specially Designated National "for materially assisting and acting for or on behalf of the Government of Syria, Central Bank of Syria, Adib Mayaleh, and Batoul Rida".

Ilyumzhinov denies the charge and claimed his only contact with Syria was in his role as head of FIDE.

Under Ilyumzhinov, FIDE was granted recognition by the International Olympic Committee in 1999 and is a member of the Association of IOC Recognised International Sports Federations.(ARISF).

Earlier this year, Ilyumzhinov was elected to the ruling Council of SportAccord, the umbrella group for Olympic and non-Olympic sports.

News of Ilyumzhinov's decision was first announced in a post in Russian on Twitter from Berik Balgabayev, his assistant.

It was later confirmed by Nigel Freeman, executive director of FIDE.

"Following the announcement by the US Department of the Treasury that the US levied sanctions against Kirsan Ilyumzhinov, Russian citizen and FIDE President, Mr Ilyumzhinov has informed the Presidential Board that he will withdraw from any legal, financial and business operations of FIDE until such time as Mr. Ilyumzhinov is removed from the Office of Foreign Assets Control sanction list," he said following today's meeting in Athens.

"Mr Ilyumzhinov advised that he has initiated legal procedures in the US aiming to request additional information and reverse restrictive measures put by the US Department of the Treasury.

"During the next Presidential Board meeting, Mr Ilyumzhinov will update the Board as to the progress of the legal procedures.

"Mr Ilyumzhinov’s decision to withdraw from any legal, financial and business operations of FIDE is to enable him to concentrate on clearing the situation with the US Department of the Treasury."

He will be temporarily replaced by the Deputy President, Greek Georgios Makropoulos.

Ilyumzhinov claimed following his election to the SportAccord Council in April that Russian Sports Minister Vitaly Mutko and Russian Olympic Committee President Alexander Zhukov has asked him to act as a link between Russia, the IOC and SportAccord on the Council to help restore peace following the controversy that broke out when then SportAccord President Marius Vizer had publicly criticised his IOC counterpart Thomas Bach.

Ilyumzhinov was President of the Republic of Kalmykia in the Russian Federation until 2010 and is the founder of founder of Novy Vzglyad Publishing House, which publishes the weekly newspaper Novy Vzglyad in Moscow.