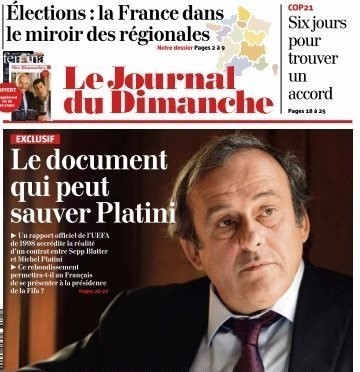 Michel Platini's legal team claimed today that a 23-page document published in a French newspaper proves he is not guilty of corruption and will pave the way for him to stand to succeed Sepp Blatter as President of FIFA.

Blatter, who like Platini is currently suspended following allegations of illegal payments, could face further problems however after a new indictment was published by the United States Department of Justice (DOJ).

The new charge refers to the high-ranking official as "Co-Conspirator #17" and states he caused three payments totalling $10 million (£6.5 million/€9 million) to be wired from a FIFA account in Switzerland to an account controlled by the now-disgraced FIFA vice-president Jack Warner.

It is not stated who co-conspirator "#17" is, but the indictment states the money in the payment was in return for World Cup votes by then CONCACAF President Warner and Chuck Blazer, the regional governing body's secretary general, who has pleaded guilty to the charge.

The charge sheet has also been amended so the status of one of the two men identified in the document, originally published in May following the DOJ's raid on FIFA in Zurich in May, has now been updated to that of "Co-Conspirator #14".

Neither individual is identified by name.

An email from Valcke in December 2007 also states Blatter had been involved with discussions over the payment.

Valcke and Blatter both claimed they believed the money was to help football development in the Caribbean.

They were among 16 new officials indicted as part of a conspiracy, accused of corruption offences totalling $196 million (£130 million/€181 million).

Platini, currently serving a 90-day suspension, is due to appear before the FIFA Ethics Committee on December 16 to explain an alleged "disloyal" payment of CHF 2 million (£1.3 million/$2.1 million/€1.8 million) he received from Blatter for work he claimed to have carried out for FIFA between 1999 and 2002.

The payment was, however, not made until 2011, raising suspicions of why there was a nine-year gap between Platini carrying out the work and receiving his money.

French newspaper Le Journal du Dimanche has published a memo today which it says was presented to UEFA Executive Committee members in November 1998 and recorded the fact that Platini was being paid CH1 million (£664,000/$1 million/€923,000) a year for work he was doing for FIFA.

"From the moment that we have proof of an agreement between FIFA and Mr Platini, and of knowledge of this agreement by officials of UEFA, then this inquiry falls down," he told news agency Reuters.

"For us, it's very important evidence that Mr Platini has always been telling the truth.

"It shows that the contract did not have any sort of secret character and that many people, including those in UEFA and FIFA, have known about it since 1998."

Platini still hopes to be able to take part in the FIFA Presidential election at the world governing body's Extraordinary Congress in Zurich on February 26.

Many believe if he is allowed to stand, he still has a realistic chance of winning.